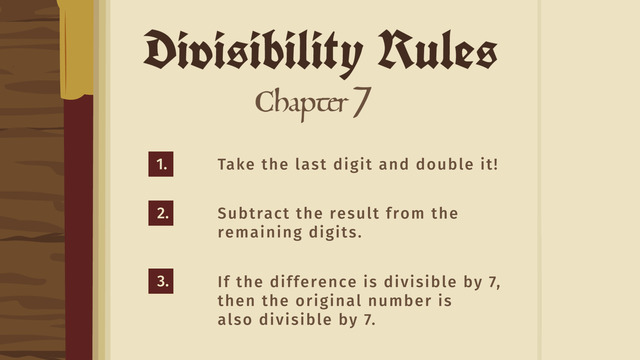 Basics on the topic Divisibility Rules - 7

Gain familiarity with factors and multiples.

Mirror, mirror, on the wall, who's the cleverest of them all? The evil witch, Snow White, or her 7 friends Stay tuned to see how this story ends The witch has a notion she thinks is terrific to make a potion that's also a soporific. With Snow White in dreamland, the evil witch can unveil her plan. There's just one glitch, a hitch for the witch To avoid a one-way ticket to heaven, Snow White leans on the Divisibility Rules for the number 7.

In an attempt to trick Snow White, the witch offers her a basket filled with 15, delicious-looking apples. Snow White doesn’t know the apples are laced with a sleeping potion, but she rejects them regardless. Why? Because she can’t divide the 15 apples among the 7 dwarfs evenly, and she doesn't play favorites. The witch is not discouraged. So the very next day, she returns. This time, she has a cart full of apples. The witch doubts that Snow White can calculate such a large quotient quickly and will simply decide to accept the cart and its poisonous contents. The witch proudly declares that she has 543 apples, more than the dwarves and Snow White can ever eat. Again, Snow White refuses because she can’t divide the number of apples evenly into groups of 7. How did she determine this so quickly?

Foiled again. What's an evil witch to do? Has Snow White simply outsmarted her?

While we were busy calculating, 77 pies are now ready and waiting. Prepared by Snow White with love and care, her pies are famous far, wide and everywhere. And because she's so super sweet, she offers the witch a pie that can't be beat.

Would you like to apply the knowledge you’ve learned? You can review and practice it with the tasks for the video Divisibility Rules - 7.
More videos for the topic Characteristics of Numbers