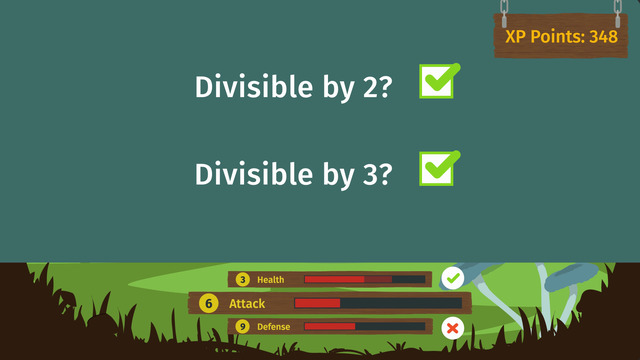 There’s a hot new game that’s got everyone playing! It’s called: Creature Capture. Each player’s objective is to capture and then train the creatures they find. Players receive points for victories and can use those points in order to level up their creatures. Meet Olivia. She’s been playing Creature Capture for a few weeks now.

Olivia has 348 points to spend, but which of her character’s abilities can Olivia increase?Let’s help Olivia upgrade her character. Is 348 divisible by 3? 6? 9? Is there a quick way to find out without having to use long division each time? Yes!

The Divisibility Rule for 3

There are so-called "divisibility rules" that help you determining whether a certain number is divisible by a number 1-10. The divisibility rules for 3 and 9 are quite similar. First, find the sum of all the digits in the number. For 348, you have to add 3 + 4 + 8. Doing so gives us 15.

The Divisibility Rule for 9

The Divisibility Rule for 9

Summary of the Divisibility Rules

Olivia decides to increase her character’s Attack. She just got challenged by a gamer who goes by the tag -=13urntK00k!ez=-. Let’s see how well Olivia does with her improved character!
Oh no, he attacks first. What an impressive attack!! Maybe Olivia should have upgraded her character's Health or Defense instead. Who is this gifted gamer? Granny?

Would you like to apply the knowledge you’ve learned? You can review and practice it with the tasks for the video Divisibility Rules - 3, 6, 9.
More videos for the topic Characteristics of Numbers