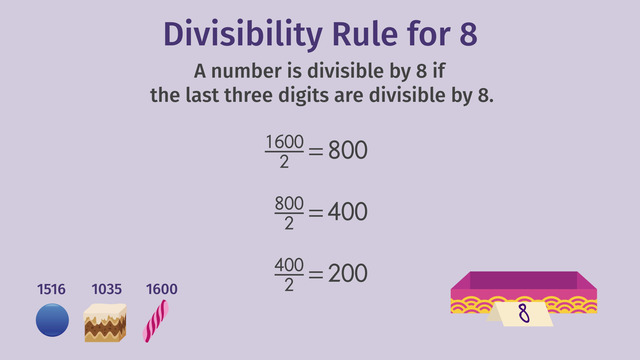 Note that once a number doesn’t satisfy a rule, then that number is not divisible by the number that rule is for. There is a divisibility rule for every number. However, some of the rules are easier to use than others. For the rest, it might be simpler to actually divide.

Billy Bonka is bonkers for making sweet treats. Customers love his delicious candy concoctions and the latest batch is ready. Billy just needs to divide the batch into packages with 4, 5, 8 or 10 treats.

To figure this out, Billy Bonka can use the rules of divisibility. In his latest batch, Billy made 1516 blueberry balls, 1035 caramel cubes, and 1600 strawberry strips and he has packaging for 4, 5, 8 and 10 treats per package. Billy wants to package the treats without having any remainders, so he must divide the number of treats among the packages evenly. Okay, let’s get to work. Which of the candies can Billy pack into packs of 5?

But what about packs of 8? Although the rule for 8 might seem a little tricky, it can save you a lot of time. For multiples of 8, if the last three digits are divisible by 8, then the entire number is divisible by 8. Is 516 divisible by 8? 8 goes into 51 six times, bring down the 6 and since 8 doesn't go into 36 an even number of times, 516 isn't evenly divisible by 8 and therefore neither is 1516.

What can Billy do with the 1035 cubes of chewy caramels? Let’s use the divisibility rules to figure it out. The last three digits are 035, and that’s not evenly divisible by 8. Wow that was fast and easy! Like taking candy from a baby! And finally, let's take a look to see if 1600 is divisible by 8.

So, just to review.

Okay, back to Billy. Billy has it all figured out. He'll have this batch of goodies ready for delivery in no time at all. That's just great! Unless he decides to make combinations packs. Oh boy!

Would you like to practice what you’ve just learned? Practice problems for this video Divisibility Rules - 4, 5, 8, 10 help you practice and recap your knowledge.
More videos in Characteristics of Numbers