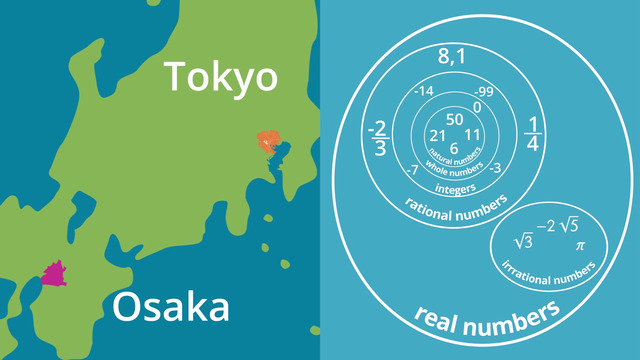 Basics on the topic Types of Numbers

There are different types of numbers in the real number system. When you started to count things at a very early age, you learned the natural numbers. They are numbers such as 1, 2, 3, 4, 5, and so on. Then you discovered that there is a special number, zero. Natural numbers including zero are called whole numbers. Later, you learned about negative numbers such as -1, -2, -3, and so on. These numbers together with the whole numbers are united by the term 'integers.' Apart from integers there are also positive and negative fractions and decimals, either terminating or repeating. All fractions and decimals, together with integers, are rational numbers.

This video will give you insight into the types of numbers with a great analogy that is easy to remember. It will also help you understand why all integers are rational numbers but not all rational numbers are integers.

Use properties of rational and irrational numbers. CCSS.MATH.CONTENT.HSN.RN.B.3

The system of different types of numbers is structured quite the same like the countries and cities all over the world. This is Hayato. He lives in Japan. This is a island nation in East Asia. The Japanese islands are in the Pacific.

When we look what comes next, we find the integers. The integers are whole numbers as well as negative numbers. It is like all of the streets in the district of Shibuya.

Together the rational and the irrational numbers are in the real numbers. Just like Osaka and Tokyo are both in Japan.

You have seen the organization of our Number System is structured much like all of the countires and cities we live in. And also Hayato in Japan learns this. Because the Number system is the same all over the world.

Would you like to apply the knowledge you’ve learned? You can review and practice it with the tasks for the video Types of Numbers.
More videos for the topic Basic Arithmetic