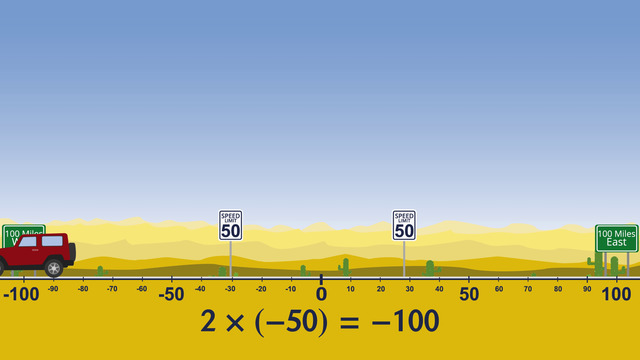 Basics on the topic Multiplying and Dividing Integers

Integers are positive and negative whole numbers, which also include zero, examples are -3, -1, 0, 4, 10, and so on. When multiplying and dividing integers, you have to remember just one rule, which is easy to learn.

You will find a pattern if you compare the products or quotients of integers after multiplying or dividing them: multiplication or division of integers with like signs always gives you a positive solution. Multiplying or dividing integers with unlike signs, on the other hand, such as with a positive and a negative number, always gives you the solution of a negative number.

This video gives you a real-life example for the concept of products and quotients of integers and summarizes all you need to know about the rule concerning like signs and unlike signs in a cheat sheet . The best thing is: you only have to remember one rule that works for multiplication as well as for division!

After watching this video you will never be confused again about the signs when dividing or multiplying intergers. This video covers negative and positive numbers on the number line as well. So whenever you have to divide or multiply integers, look for the signs.

So you think multiplying and dividing positive and negative integers is complicated... Don't stress! I'll show you how to make sense of this important math topic. Let's start with multiplication.

Imagine that you stand at a highway intersection. Cars are going east and west. Instead of a compass you can also use a number line, where east is the positive direction and west is the negative direction.

Let's write this as an equation. Going for two hours 50 miles per hour in the positive direction can be written as 2 · 50 = 100. What happens if a car travels in the opposite direction? Let's go back to where you stand.

Imagine, now, that a red car is going west, in a negative direction on the number line. Two hours later, the red car is 100 miles west of where you stand, at negative 100. I'll write this as a number sentence. Remember, going west in this case means going 50 miles per hour in negative direction. So we have 2 · −50 = −100.

Now, let's think about this topic another way. Where was a car going east two hours before it passed you standing at the intersection? Two hours before, driving east at fifty miles per hours, this car was one hundred miles west of where you stand, at minus 100 on the number line.

Let's write this as an equation. Two hours ago can be written as negative two. Remember, going east at fifty miles per hour means going in positive direction. So the equation is: −2 · 50 = −100.

And what about a car traveling west? Where was it two hours before? Traveling at fifty miles per hour in a negative direction on the number line, it was 100 miles east of where you stand. This is equal to positive 100.

I'll show you the equation. Negative two, which represents 2 hours ago, times negative fifty - for going 50 miles west, in the negative direction - is equal to positive one hundred: −2 · −50 = 100.

Rule for Multiplication and Division

Can you find a pattern? You see here:

You know what's so great about this rule? It works the same for multiplying and dividing numbers! And, not just integers but fractions, too.

Hooray! With this simple rule, you can be the master of multiplying and dividing positive and negative numbers! But remember, you should never mess with the Space Time Continuum.

Would you like to apply the knowledge you’ve learned? You can review and practice it with the tasks for the video Multiplying and Dividing Integers.
More videos for the topic Basic Arithmetic