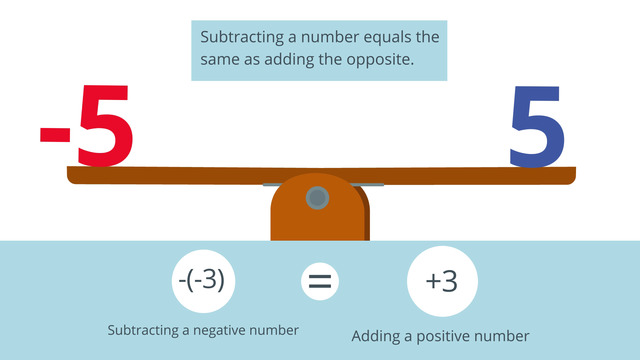 Basics on the topic Subtracting Integers

Subtracting integers is not difficult, if you follow one easy rule. Integers are positive and negative whole numbers including zero, such as -5, -2, 0, 3, 9, and so on.

This video shows you how to subtract integers involving something you possible know from your childhood: a see-saw. This will help you understand the concept behind the rule, so you will remember it for the rest of your math career. This video also includes a more complex example, but don't worry: you will be guided step by step through the example and you might discover that the rule makes it much easier than you thought.

Have you ever tried to balance a seesaw? I will explain to you what this has to do with subtracting integers. How can we bring this seesaw into balance?

We need to put a value here, on the right side, to get it in balance. In this case, a positive 3 balances the seesaw. We can write this as an addition: + 3. Let us go back to the first situation. Can you imagine another way to bring this seesaw in balance? Right!

You have learned that subtracting a negative number is the same as adding the opposite number. But might this knowledge help our little friend in his situation? Maybe...

Would you like to apply the knowledge you’ve learned? You can review and practice it with the tasks for the video Subtracting Integers.
More videos for the topic Basic Arithmetic