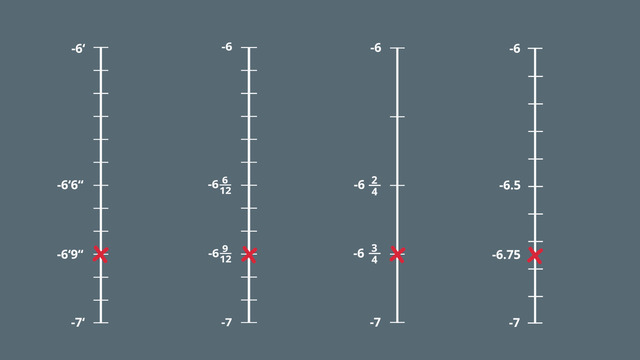 Basics on the topic Rational Numbers on the Number Line

Representing rational numbers by placing them on a number line or reading given points on a number line can be tough at first glance. But once you understand how units on number lines help you, you will master it in no time.

Rational numbers can be integers, fractions, or decimals. And remember, they can be positive numbers as well as negative numbers. That is why a number line is a line that extends in both directions up to infinity. There is one convention: positive numbers are always on the right side of zero.

Number lines can have different scales according to what they represent. There can be number lines with units of integers such as -3, -2, -1, 0, 1, 2, 3, and so on. Keep in mind, you don’t always have to display 0 on the number line, especially if you have to include large numbers that are all in close proximity of one another on the number line.

When reading numbers on a number line, look at the units. If you have 10 units between integers, and aren't given more specific instructions, you can either write the number in decimal form or in fraction form (over 10). If you have more or less than 10 units, they probably represent fractions. Just count the units between the integers, for example 7, and you know that the first unit after zero represents 1/7, the second 2/7, and so on.

Repeating decimals cannot been shown on the number line accurately, it is therefore best to write them as a fraction.

Tim is feeling nervous. He is about to jump off the high dive at the local swimming pool. There he goes! How far above the water is he shortly after jumping?

To answer this question, we can look at the rational numbers on the number line. Let's see. The platform is 33 feet high. The tower is like a vertical number line. The surface of the water can be represented by 0, above we have positive numbers. Below the water we have the negative numbers.

Fractions on the Number Line

To more accurately determine his location, we can zoom in to display a more detailed scale. Now you can see he is somewhere between 27 and 28 feet on the number line. Let's zoom in even more.

We can divide feet in to inches. As you know, there are 12 inches in 1 foot. So if you count from left to right on the number line, you land at 27 feet and 3 inches. This represents Tim's current location above the water.

You can simplify this mixed number to 27 and 1 over 4, or 27 and one fourth. As you can see, our location on the number line between 27 and 28 remains the same. We have just changed the scale.

Decimals on the Number Line

We can represent 27 and one over four in yet another way, with a different scale: It can also be represented as a decimal: 27.25. If we display decimals on the number line, we divide our units into 10, 100 and so on. Here our number is exactly between 27.2 and 27.3. We can either zoom in more and divide tenths into hundreths, or we can assume the value is 27.25.

Negative Numbers on the Number Line

Let's take a closer look to figure out his exact depth. Now you can see, he dived somewhere between 6 and 7 feet below the surface, or between -6 and -7 feet on our number line. To be more accurate, let's zoom in even more.

Tim is happy that he overcame his fear. But wait, something is not right.

Would you like to apply the knowledge you’ve learned? You can review and practice it with the tasks for the video Rational Numbers on the Number Line.
More videos for the topic Basic Arithmetic