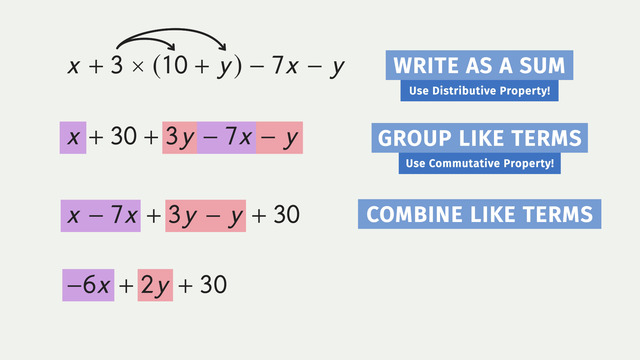 Before evaluating expressions or solving equations, your goal is to always simplify as much as possible. To do this, you should follow some simple steps, especially where variables are concerned. You should know how to use the Distributive Property as well as the rules for combining variables.

If you have complex expressions or equations, you first look for addition or subtraction inside the parentheses. Then, you can simply follow the rest of the order of operations (PEMDAS, BEDMAS, BODMAS, BIDMAS). Afterwards, you group like terms before combining like terms.

In case you were wondering what like terms and unlike terms are and how to group and combine like and unlike terms when variables are involved, this video will enlighten you. If you had problems with what to combine, always keep in mind, that different variables should be treated like different species in real life. That being said, you will master simplifying variable expressions in no time, promised.

Don't try to sneak past this topic in maths if you have difficulties; simplifying variable expressions is one of the most important issues for all your future math topics and in our video it will be explained step by step to you. Relax, lean back, watch and learn.

Use properties of operations to generate equivalent expressions. CCSS.MATH.CONTENT.7.EE.A.1

Algebraic expressions with more than one variable can look scary. To make variable expressions easier to solve, simply simplify! Don't be frightened; I will walk you through the steps.

This expression has two different variables: 3x + 2y. Hmm… How do you simplify this expression? Maybe you're thinking 3x + 2y = 5xy. STOP! This is wrong! You can't simplify this expression anymore. Combining terms with x and terms with y is not possible.
It's almost as wrong as Dr. Evil attempting to create a “Sharkuine” – by combining a shark with a penguine! Just like sharks and penguins, variables such as x and y are not the same. Repeat to yourself: You can only add and subtract like terms! When adding and subtracting variables, never, ever combine unlike terms. Never, ever!

Example how to simplify Variable Expressions

Ok, let’s go over this one more time:

Most important: Never, ever try to combine unlike terms. Here is your reminder: Don’t create sharkuins! Don’t make the same mistake as Dr. Evil. He had to learn the hard way.

Would you like to apply the knowledge you’ve learned? You can review and practice it with the tasks for the video Simplifying Variable Expressions.
More videos for the topic Basic Arithmetic