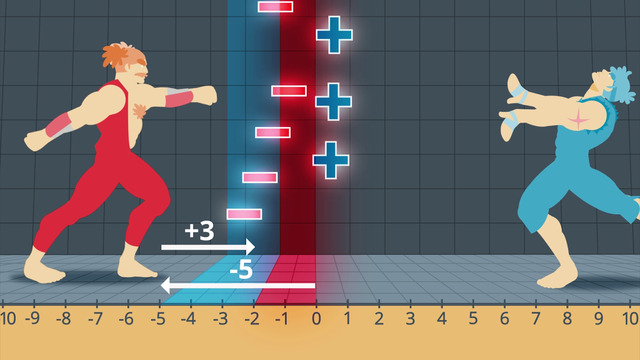 Basics on the topic Adding Integers

Have you ever wondered how to add a negative number to a positive number? Negative and positive numbers, including zero, are called integers. Addition of integers is not that hard, once you understood the main concept behind it. The number line can help you understand how adding integers works.

The sum of opposite numbers always equals zero. To show this on the number line, think of negative numbers as going to the left directionally, whereas positive numbers means going to the right directionally. If you start at zero and go 3 steps to the right for 3, going 3 steps in the opposite direction for -3 makes you end up at zero again. So always remember: if adding opposite numbers, regardless of order, you get 0 as the solution.

But what about integers that are not opposite numbers? To understand this case you should look at a number line as well. Again, for positive numbers start at zero and go the amount of steps to the right; adding a negative number means you go those number of steps to the left. Wherever you end up on the number line after doing so will be the solution.

The video shows you adding intergers the easy way, step by step and in an entertaining setting. Enjoy!

Meet Elena and Noah. Given a choice, they would rather play video games after school than do homework! Can you believe that?

Adding Opposite Numbers with the same Absolute Value

You already know integers. These are the whole numbers on the positive and negative side of the number line. They are separated by zero, just like the opponents in the game.

OK let's look at the number line to see what happens when we have to add opposite numbers with the same absolute value. Noah attacks first with a positive 3 and Elena counters with a negative 3.

You go 3 steps left for negative 3 and then 3 steps right from that point for positive 3. Adding equal and opposite numbers always equals zero. Or, if we write this as an equation: −3 + (+3) = 0.

So remember: Adding numbers with opposite signs equals zero.

Let's watch Elena and Noah play another round. This time, Elena uses Negatron's power up of negative 2. Now we have to add two negative numbers.

Adding a Negative and a Positive Number

Oh no! Noah forgot to use Positron's power up! He uses the regular attack of positive 3. So now we have negative 5 and positive 3.

Again, you go 5 steps left for negative 5 and from that point 3 steps right for positive 3. Adding both arrows gives you negative 2.

When adding a positive and a negative number, the sign of the number which has the greater absolute value "wins."

Would you like to apply the knowledge you’ve learned? You can review and practice it with the tasks for the video Adding Integers.
More videos for the topic Basic Arithmetic