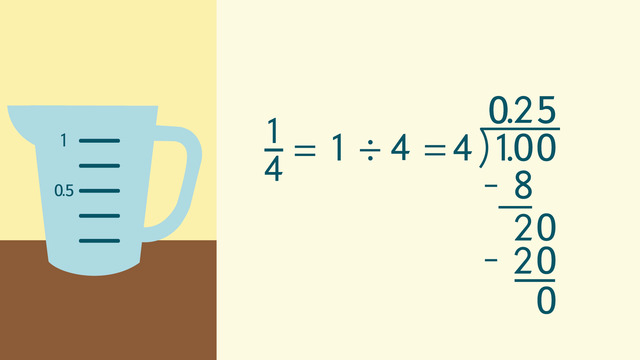 In real life it's often necessary to transform fractions into decimals or the other way round. Have you ever wondered why $0.25 is called a 'quarter?' Maybe you also came across a recipe where some measurements were given in fractions while others appeared in decimals.

When writing rational numbers as fractions or decimals, you can use two strategies, depending if you want to transform decimals into fractions or fractions into decimals.

Fractions are like unsolved division problems. Instead of ⅛, you can also write 1÷8, which you can solve in long division. Since your solution will be less than 1, write 0 above the division bar, include the decimal point, then add as many zeros to the dividend as you might need. Then start dividing as you're used to. Many simple fractions can be turned into decimals in only a few steps. Whenever you have 0 as a remainder, you are finished. Decimals that have only a few digits after the decimal point are called terminating decimals. There are fractions, such as ⅓, or 1÷3, however, that will never have 0 as a remainder and will go on forever with repeating digits. These are called repeating decimals.

For transforming terminating decimals into fractions you look at the length of your decimal repectively, to which place after the decimal point it goes to. 0.75, for example, goes to the hundreths place, so you can rewrite this number as 75 over 100. Guess how a decimal that goes to the thousandths place will be transformed into a fraction? Right, by rewriting this number with all digits after the decimal point over 1000.

Through the use of an everyday situation, this video will provide you with all you need to know about transforming fractions into terminating decimals and vice versa, including how to use long division for solutions that are less than 1.

Jim wants to make some muffins for his friend's birthday. What this has to do with writing rationals as fractions and terminating decimals, I will show you. He is searching the internet for a good recipe. Finally, he finds some really yummy looking muffins! Many of the ingredients are written as decimals of cup measurements.

But when he looks at the measuring cup, all of the measurements are given in fractions! We can help Jim transform those fractions into decimals. Let's start with one half. Fractions are just unsolved division problems. One half is the same as saying 1 divided by 2.

To solve this by hand you must write the fraction as a long division problem.

Let's try the same strategy with one fourth. One fourth is the same as 1 divided by 4 which can be rewritten as a long division problem.

Of course you can also transform decimals into fractions. Let's try 0.75 for example. 0.75 can also be called 75 hundreths because the decimal goes out to the hundreths place.

Let's look at another example. 0.125. One is in the tens place, two is in the hundreths place, and the decimal ends in the thousandths place. This decimal is called one-hundred and twenty five thousandths. This tells you to write the fraction with 125 in the numerator and 1000 in the denominator.

After converting the measurements, Jim makes some delicious looking muffins. Not being able to resist the smell, he tries one. Yuck! The muffin tastes disgusting! He accidentally added salt instead of sugar. Poor Jim.

Would you like to apply the knowledge you’ve learned? You can review and practice it with the tasks for the video Transforming Terminating Decimals to Fractions and Vice Versa.
More videos for the topic Basic Arithmetic