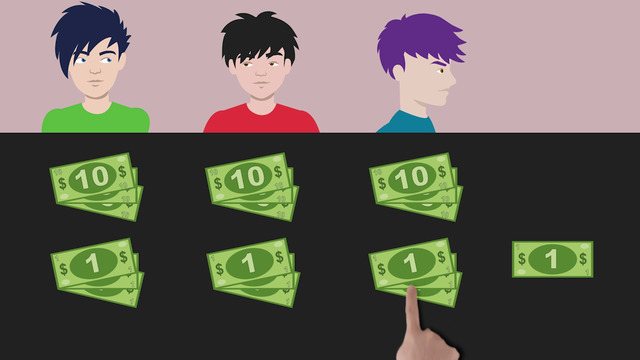 When you learned about fractions and decimals, you may have noticed that some fractions such one-half, one-fourth, one-eighth, and so on divided out to nice terminating decimals such as 0.50, 0.25, 0.125, and so on. The decimals terminated meaning they ended or stopped.

Other fractions such as 1/3, 1/6, and 1/9 - when you used long division to divide out these numbers to make their equivalent decimals, the remainder just went on and on… repeating over and over, and you indicated the repeating digits with a horizontal bar placed above the repeating digits. Problem solved. But, for repeating decimals, how do you go in the other direction, from decimal to fraction? How do you deal with the repeating digits? What happens to that extra little piece – is it just lost forever?

To change from a repeating decimal into a fraction, there is a trick, and it involves the number 9. Put the repeating number or numbers in the numerator then put the same number of 9s in the denominator and simplify. To see this trick in action and figure out what to do with numbers that go on and on and on, so you can switch from fraction to decimal and back again, watch this video.

The brothers Zooey, Louie and Phooey formed a band called the Musical Triplets and entered their school’s annual Battle of the Bands contest. Look at that?! The Triplets beat last year's winner, the Math Bros. and win first place! The grand prize is a one hundred dollar bill! They plan to divide the prize money evenly amongst themselves.

They divided all the money, except for one last penny. What if they want to split that one remaining penny? We know how to split one cent into three even parts with math. We write this as a fraction one-third but how much is this, exactly? You already know the fraction bar indicates division, so one third is the same as one divided by three.

Do you remember how we calculate the quotient? That's right! We use long division! Now do the math. Do you see a pattern? Since we'll always have a remainder, we call this number, and numbers like this, a repeating decimal. Instead of writing the repeating part again and again, we can use a horizontal bar to indicate the digits that repeat.One third is equal to one divided by three, which we rewrote in long division form. While evaluating this problem, we get zero point three, three, three, three, three, three. Oh, sorry.

Converting a repeating decimal into a fraction

Would you like to apply the knowledge you’ve learned? You can review and practice it with the tasks for the video Transforming Simple Repeating Decimals to Fractions and Vice Versa.
More videos for the topic Basic Arithmetic