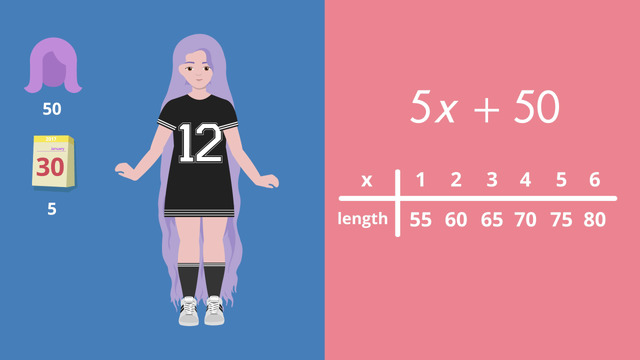 Information about the video Evaluating Expressions

To evaluate expressions, it is helpful to review some words associated with this topic. First, what is an expression, and how does it differ from an equation?

An expression does not have an equal sign while an equation does. An equation includes two expressions with an equal sign in between the expressions. Expressions are made up of terms. A term can be a number by itself, and this is called a constant. A term can also include a variable which is a letter or other symbol that stands in for an unknown value, usually the letter x. Variables can be alone or attached to a numbers by the operation of multiplication or division such as 3x or x/3. This number attached to the variable is called a coefficient.

Let me tell you a story about evaluating expressions…

Once upon a time

"Once upon a time, there lived a girl in a tower
She was there every day, hour after hour."
"Her name was Rap-Punzel,
a mischievious damsel, whose hair was a handful"

"The love of her life, Prince MC,
was in love with Rap-Punzel... as in love as can be.
They waited for the day and waited for the time
when the prince could scale the tower with a short little climb."
"But he's tired of waiting, what a waste of days.
He should evaluate expressions but he doesn't know the way"

Let's help MC Prince. At the start of this tale, Rap-Punzel’s hair is 50 inches long. Each month, it grows 5 inches." Let’s write this as an expression… 50 is the constant number in this expression, meaning it does not change. We said before that her hair grows at a rate of 5 inches per month. The number of months is the unknown quantity, which we will call x. We can also use any other variable.

Expression for the length of Rap-Punzel's hair

The number five is the coefficient of the variable. So… the expression to describe the length of Rap-Punzel's hair after a variable number of months is 5x + 50. Ok, let's use our expression to evaluate the length of Rap-Punzel's glorious hair over a period of a few months. Let’s set up a function table… When evaluating expressions, always remember to use the correct order of operations.

... she cut her hair. Now it's just 10 inches long. To keep her hair healthy, Rap-Punzel must trim her hair two inches every month. Despondent, MC Prince wondered, how much longer must he wait to be with his beloved? Let's modify our expression. 5x for the growth per month minus 2x for the trimming per month plus ten for the starting length.

Now, simplify the expression. 3x + 10. MC Prince wondered, '...after six more months, how long will her hair be?...' Evaluate the expression, this time, letting x equal six… use the correct order of operations, 3(6) = 18; plus ten it is equal to twenty-eight. Her hair will only be twenty-eight inches long!

"Still waiting outside, MC Prince began to doubt
without Rapunzel in his life, he's like a plant in a drought
he had an idea, on which he was keen"
what's this? OH NO...he bought magic beans...

Would you like to practice what you’ve just learned? Practice problems for this video Evaluating Expressions help you practice and recap your knowledge.
More videos in Basic Arithmetic