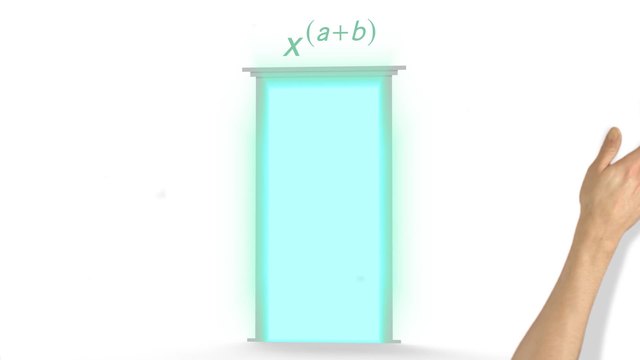 Basics on the topic Proofs of Laws of Exponents

After this lesson you will be able to prove that a non-zero number raised to the zeroth power is equal to one.

Learn that a number raised to the zeroth power is equal to one by helping Vonn continue his studies in becoming a great philosopher!

This video includes key concepts, notation, and vocabulary such as: quotient of powers law (when dividing two powers with the same base, subtract the exponents); powers or power law (multiply the inner and outer exponents together); powers of products law (expand an expression by rewriting each terms with the outer exponent); and zeroth power law (any non-zero number raised to the zeroth power equals one).

Before watching this video, you should already be familiar with non-zero exponents.

After watching this video, you will be prepared to learn how to apply the laws of exponents to expressions with fractional and negative exponents.

Transcript Proofs of Laws of Exponents

Snipe has arrived at the fabled Mushroom Castle, and uses the lost pieces to pass through the Door of Wisdom. But this is ridiculous: how can he possibly squeeze through that tiny door? Oh, hello! It looks like the frog wants Snipe to drink a magic potion! But is this frog trying to make Snipe croak? In order to confirm that this frog isn't slimy, Snipe will have to explore the laws of exponents. The potion is inscribed with a mathematical expression 'x' to the 'a' times 'x' to the 'b'. Over the door there's another expression 'x' to the quantity 'a' plus 'b'. If these expressions are the same, the potion will squeeze Snipe through the door. How would YOU confirm the equivalence of these two expressions? One option is to substitute values for the variables, and see if the equation holds true. That won't PROVE that the equation is true for ALL values, but experiments with SOME sets of values will give Snipe more confidence. So, let's select a few values at random: 'x' equals 3, 'a' equals 2, and 'b' equals 4. Now we plug in our values for the variables. On the left, we have 3 squared times 3 to the 4th. Three squared is 9, and 3 to the 4th is 81. Nine times 81 is seven twenty-nine. On the right we have 3 to the quantity 2 plus 4. That's 3 to the 6th. Three to the 6th is seven twenty-nine as well! The results were the same! Based on this one experiment, would you drink the potion, or would you try more values? Snipe decides to check four more sets of values, and the equation holds for each set! He still can't be COMPLETELY sure that it's true for all values, but he's more certain than before. Snipe trusts the frog and guzzles the potion, and it works! What's going on here? Are those dragonflies? The frog points to a dragonfly which has an expression on it: 'x' to the 'a', raised to the power of 'b'. Snipe looks up at the door, which has the expression 'x' to the 'a' 'b' floating above it. Is it wise to trust the frog and fly the friendly flies? How can Snipe prove these expressions are equivalent? Substituting values worked before, but this time he wants something more certain. Snipe can use what he knows about exponents to manipulate one or both expressions until it's clear that they are equal. This won't be a formal proof, but it will be an effective argument that is much more certain than just experimenting with specific values. He starts by simplifying the challenge, and assumes that 'a' and 'b' are positive integers. X' to the 'a' means 'x' multiplied together a total of 'a' times. Raising to the power of 'b' means that we have 'x' to the 'a' a total of 'b' times. How many times is 'x' multiplied by itself altogether? That's 'a' plus 'a' plus 'a' and so on, 'b' times, which is that same as 'a' times 'b'! That means the expression equals 'x' to the 'a' 'b'! By manipulating one side of the equation, we've shown that 'x' to the 'a', raised to the power of b, is the same as 'x' to the 'a' 'b', at least when the exponents are positive integers. But Snipe still needs to establish the equation for the cases when one or both exponents ARE negative. And he'd like to formally PROVE it, justifying each step with the rules of arithmetic that he already knows. Let's first look at the case where 'a' is negative and 'b' is positive. Before we start with the equation, let's define 'a' as negative 'c.' Using substitution, we can plug in negative 'c' in for 'a', giving us 'x' to the negative 'c', to the 'b'. Using the definition of a negative exponent, 'x' to the negative 'c' is 1 over 'x' to the 'c'. The power of a quotient law allows us to apply the exponent 'b' to the numerator and denominator: 1 to the 'b', over the quantity 'x' to the 'c' raised to the 'b'. 1 to any power is still 1, so 1 to the 'b' is equal to 1. Since 'c' and 'b' are both positive, we can use what we proved before to write 1 over 'x' to the 'c' 'b'. Again using the definition of a negative exponent, 1 over 'x' to the 'c' 'b' is equal to 'x' to the negative 'c' 'b' The associative property of multiplication allows us to write negative 'c' times 'b' as negative 'c', times 'b' And finally, using substitution of 'a' equals negative 'c' gives us 'x' to the 'a' 'b'. That's what we wanted to prove! Snipe has now written a formal proof of the power of a power rule when only 'a' is negative. He quickly does the same for the other cases and now knows that the rule holds for all values of 'a' and 'b'. Snipe confidently takes off and buzzes through the distant door! Snipe finds himself in front of a locked trapdoor, and here's that slippery frog again, offering a key. While Snipe sizes up this amphibian offer, let's review our exploration of the laws of exponents. We established the truth of equations in three different ways. First, we substituted values for the variables. This gets the job done quickly, and is easy to understand, but this method doesn't provide certainty for ALL values of the variables. Then, we made a strong argument by manipulating one side of the equation. This was persuasive, but we didn't give mathematical RULES to justify every step. Our last effort was a formal PROOF, where every step was justified with a mathematical RULE. Formal proof is often the most challenging way to establish mathematical truth, but it's also the most convincing. Snipe decides to blindly trust the frog and puts the key into the lock. Oh, a frog princess...how, um, beautiful! So what happens now, a kiss? Aack!