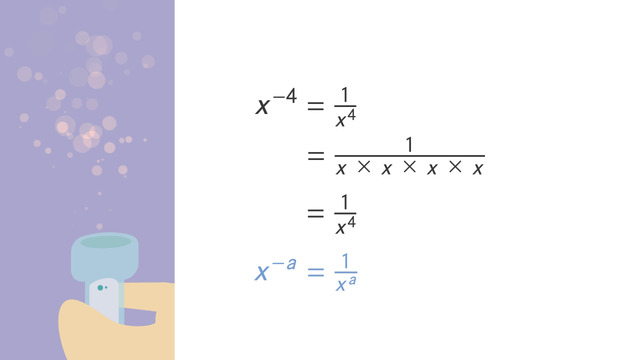 Basics on the topic Zero and Negative Exponents

To make this concept easier to understand, use the Quotient of Powers Property. For same bases in the numerator and denominator, simply subtract the exponents, so for this same fraction, we can subtract 2 from 0 to calculate the difference of -2. So 7 raised to the -2 power is equal to Now, this makes sense and since it makes sense, it’s so much easier to remember how to solve problems with negative exponents. Just remember, for a negative exponent, write a 1 in the numerator, and in the denominator, write the base raised to the absolute value of the negative exponent.

To have a laugh and watch some examples of zero and negative exponents, get a bowl or popcorn and watch this video.

Interpret the structure of expressions.

In a land of two kingdoms, rival Kings Wallace the 4th and Frederick the negative 3rd enjoy playing pranks on each other. King Wallace receives a package from his rival, but is it a package or a prank ? It’s a painting…

Oh my! How provocative! In order to maintain diplomatic relations , the king must hang the painting in a prominent position...this is a terribly tricky situation, so the king calls Mr. Magic, the court mathemagician. Mr. Magic knows just what to do. He’ll shrink the painting From his bag of tricks, he pulls out a secret potion...and leaves the rest to magic.

Oh no! The shrinking potion only worked in one dimension – look what happened. Mr. Magic realizes his error ...so he pulls out another potion - this time to shrink the provocative painting proportionally by 10⁻⁵. 10⁻⁵! Wait – negative powers can be confusing. Let’s investigate. Take a look at our problem here, 10⁻⁵. We can rewrite this as a fraction. In the denominator, write the base to the absolute value of the power, or 10⁵. So, what do you write in the numerator? 1.

Now, simplify the fraction. See what happens when you have a positive exponent in the denominator of a fraction? The value of the fraction get smaller and smaller. 10⁻⁵ = 1/100,000. I think Mr. Magic is on to something here…Take a look at this example: 2⁻⁴. To rewrite this as a fraction, in the denominator, write 2⁴, then, write a one in the numerator, and simplify. 2⁻⁴ = 1/16.

Let's look at an example when the base is a variable. We can rewrite x⁻⁴ as a fraction by writing x⁴, which is x times x times x times x in the denominator and a 1 in the numerator. This simplifies to 1/x⁴. Here's the rule for negative exponents: x⁻ª = 1/xª. Remember, 'x' cannot be equal to zero. Let's look at a rule to see why this works, and then it will be easier to remember…

So, using the example, 2⁻⁴, rewritten as a fraction, is equal to 1/2⁴ is the same as 2⁰ over 2⁴ and like magic, this is equal to 2⁽⁰⁻⁴⁾, which is 2⁻⁴, so we're right back where we started. That makes it much easier to understand! Sometimes math is like magic!

King Wallace hung the picture. But wait, where is it? Ah, there. Take a look at it now… Thanks to Mr. Magic, King Wallace isn’t worrying about the picture – he’s trying to figure out what prank to play next on King Frederick…

Would you like to apply the knowledge you’ve learned? You can review and practice it with the tasks for the video Zero and Negative Exponents.
More videos for the topic Exponents