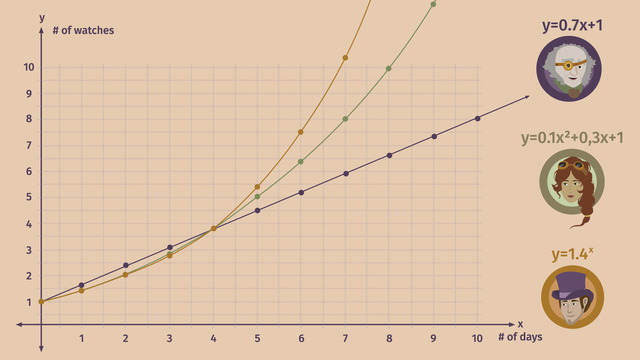 Basics on the topic Understanding and applying statistical models (linear, quadratic, and exponential)

Statistical models are useful tools to assist us in representing a set of data, usually represented in visual or graphical form, approximating a general trend and allowing prediction based from this approximation. Learn more about statistical models and how they are represented by helping Phillipe Rolox decide which of his two children will inherit his watch business. Common Core Reference: CCSS.MATH.CONTENT.HSF.LE.A;3

Phillipe Rolox has been a watchmaker for almost 50 years. His eyesight is beginning to fail him, so he decides to leave his business to his children. Phillipe has challenged his progeny, Victoria and her brother Adrien, to improve the production speed of his beloved watches. The winner of this friendly, sibling rivalry will inherit their dad’s company. Each kid is given one watch, and then they begin their search for a new machine to win the competition. To understand which machine will produce watches the quickest, Victoria and Adrien must be able to recognize linear, quadratic, and exponential functions.

Until now, Phillipe’s production has been constant. He knows that the production can be represented by a linear function. How, you ask? Let's take a look at the table recording Phillipe's production process.

Mr. Rolox is super-excited by his children’s initiative in finding faster ways to produce watches! They can produce SO many watches in so little time! Thanks to his kids, Mr. Phillipe Rolox doesn’t have to strain his eyes to make watches anymore! This is so great that he decides to work a few more years...

...too bad for his kids...I guess no one’s gonna inherit his watch shop any time soon...

Would you like to apply the knowledge you’ve learned? You can review and practice it with the tasks for the video Understanding and applying statistical models (linear, quadratic, and exponential).
More videos for the topic Statistics: Data Distribution