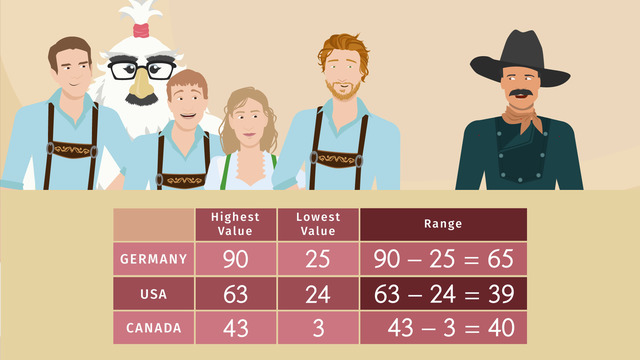 The mean, median, mode, and range are measurements used to help make sense of a data set. They give different ways of seeing where the data tends. The mean, or average, is a useful way to measure the tendency of a data set when there are no extreme values in the set. When there are extreme values, the median can be more useful, as it is the middle value of a data set, when the set is arranged in ascending order. The mode is the value which occurs most often in the data set, and thus gives the most common value in a data set. The range is the difference between the largest and smallest values in the set, and gives an idea of how spread out the data set is. Learn more about these data set measurements by helping to analyze the outcome of the Annual Bratwurst Eating Contest in Austin, Texas. Common Core Reference: CCSS.MATH.CONTENT.6.SP.B.5.C

This year, the Annual Bratwurst Eating Contest will be held in Austin, Texas, and a team from the US, a team from Canada and of course, the German team will compete.

It's too bad. Kornelius, a member of the German team is otherwise engaged, so he can’t attend the contest. But Stephan, the captain of the German team, has an ace up his sleeve. I wonder what he's up to. The winner of the Annual Bratwurst Eating Contest is the team with the highest mean number of brats consumed. But, teams will be rewarded for the biggest range as well as excellence in the three methods of calculating the central tendency of a set: Mean, Median and Mode.

Germany has a mean of 43, while team USA has a mean of 36. The Canadian team has a mean of 23 – as you can see, to calculate their mean score, we divided the sum of the bratwurst eaten by 4 since there are only 4 members of their team and therefore, 4 addends. Does the mean truly reflect the center of the data for each team? Some of the numbers seem to be too high or too low… Numbers that are higher or lower than the other numbers in a data set are called outliers, and they can skew the mean, higher or lower. So... maybe the mean is not the best measure of central tendency.

Let’s investigate this situation a little more. Take a look at the range. The range is the difference between the maximum and minimum values, highest and lowest, respectively, in a data set. A high range indicates a large difference between the maximum and minimum values in a set and may be an indicator of the presence of outliers. Wow, the range of the data for the German team is 65!

The judges have decided. To be fair to the teams from America and Canada, the judges will use the median to determine the winner. When outliers are included in a data set, the median, the central value of a data set, may give the best measure of central tendency. To find the median, order the data from lowest to highest. The median is the middle number. If there are an even number of elements in the set, you simply have to average the two middle values.

How about that? The German team is still the winner of the contest! This doesn’t seem fair, but the evidence is clear. The Germans have the highest mean AND median, so the they win first place.

Well, lookey here, it seems like they've all succumb to food coma. I guess their eyes were bigger than their stomachs. Most of them, anyway.

Would you like to apply the knowledge you’ve learned? You can review and practice it with the tasks for the video Mean, Median, Mode, Range.
More videos for the topic Statistics: Data Distribution