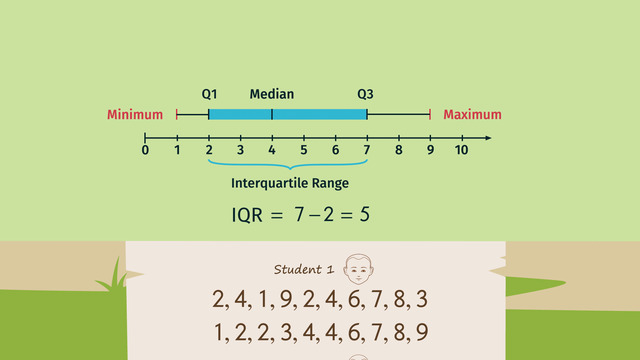 Basics on the topic Box-and-whisker plots

A box-and-whisker plot is a quick way of showing the variability of a data set. It displays the range and distribution of data along the number line.

To make a box-and-whisker plot, start by ordering the data from least to greatest. Next, inspect the ordered data set to determine these 5 critical values: minimum, Q1, median, Q3, and maximum and plot them above a number line.

A good measure of the spread of data is the interquartile range (IQR) or the difference between Q3 and Q1. This gives us the width of the box, as well. A small width means more consistent data values since it indicates less variation in the data or that data values are closer together.

Deep in the mountains lies a martial arts school at 1 Foot Fist Way that focuses on breaking wooden planks. All of the students must break as many wooden planks as they can in one strike. Each student records his number and presents it to his master at the end of the week. The most consistently good student does not have to clean the school for one week. But how can the students' master tell which of his students are most consistently the best? By using Box-and-Whisker Plots, of course!

Heeding his teacher's instructions, student 1 orders his list. The minimum, or the smallest number, for student 1 is 1. Student 1's maximum, or the largest number, is 9. Next, let's find the median. The median is the middle number in the data set. Because we have an even number of data points, there are two middle numbers. When this happens, you should take the average of the two middle numbers. In this case, the average of 4 and 4 is 4. So now we know the minimum is 1, the median is 4 and the maximum is 9. To find each quartile, we must split the data into halves.

Finally, we also need to draw a vertical line in the box to represent the median. The Interquartile Range orIQR is obtained by substracting Q1 from Q3. In the case of student 1 this is 7 minus 5 or 2. The whiskers are then drawn to connect the box to the minimum and maximum values.

Now let's look at student 2. First let's put the numbers in order. Now we need to find the 5 critical points again. Here, the minimum is 1 and the maximum is 8. Now let's find the median. Again, we have an even number of data points, this means we will have two middle values. The two middle values are 5 and 5, which when averaged, gives us 5. Now, we can split the data into halves in order to find Q1 and Q3.

Now that we have our five points, we can make a box-and-whisker plot. We draw a box from Q1 to Q3.Then, we make the whiskers by drawing lines from each end of the box to connect the minimum and maximum values.

Let's put the data from student 3 in order. This diligent disciple has already completed his box-and-whisker plot! Let's check to see if all the parts are there. The minimum is 0, the maximum is 9... This time, even though the two middle numbers are different, we still just need to take the average. So, our median is the average of 3 and 4, or 3.5. Q1 is 1, Q3 is 7.

Points are plotted, box and whiskers drawn. Now we can compare the graphs and figure out which student is the most consistent. All three of these box-and-whisker plots are pretty similar, but they do have a couple of differences.The box part of the plot for student 2 is the shortest. This means that his data points are closer together; another way to say this is that student 2 has less variation in his data.

Finally, the IQR values will show the teacher how consistent each student was. Student 1 has an IQR of 5, student 2 has an IQR of 4 and student 3's IQR is 6. So it's confirmed that student 2 is the most consistent. Before the teacher gets around to announcing the best student, the students clamor for him to show them how it's really done. Ahem. Deep in the mountains lies a martial arts school at 1/3 Foot Fist Way that focuses on breaking wooden planks, roads, trees, mountains.

Would you like to apply the knowledge you’ve learned? You can review and practice it with the tasks for the video Box-and-whisker plots.
More videos for the topic Statistics: Data Distribution