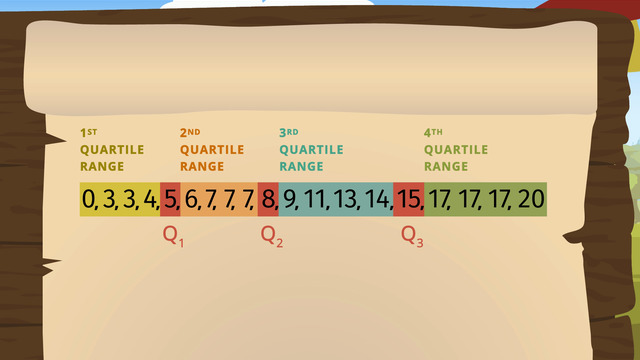 Basics on the topic Quartiles and Interquartile Range

To compute the interquartile range of a given set of data, it is important to first understand the concept of quartile, as the Interquartile range (IQR) is a measure of variability, based on dividing a data set into quartiles. Quartiles divide an ordered data set into four equal parts. The values which divide each part are called the first, second, and third quartiles; they are denoted by Q1, Q2, and Q3, respectively. Q1 is the middle value of the first half of the ordered data set, Q2 is the median value in the set, and Q3 is the middle value in the second half of the ordered data set. The Interquartile Range is (IQR) = Q3 – Q1. This video shows you an example on how to compute the interquartile range.

The following steps are a big help in computing interquartile range:

The interquartile range is used to construct box plots and to find outliers in a data set, thus giving a deeper understanding of the relationship of the data points and the data set as a whole.

"Many archers, who all shoot brilliantly, on a Medieval castle ground is where we lay our scene. From fierce competition break to new scrutiny, Where quartiles determine the archers' destinies."

Romeo has entered an archery competition devised by the King based on quartiles. The rules of the competition are a little bit different from the competitions Romeo usually enters. Upon hearing that Juliet lives in the castle, Romeo is trying to find a way they can finally be together. However, in order to avoid the punishments, Romeo has to understand quartiles and interquartile range.

One way to analyze data is to use quartiles, which is just a fancy way of saying the data is divided into quarters. The competition between the kingdom's brave archers has just ended! Let's see what fate has in store for Romeo and Juliet. In our data set, we have several archers who had to shoot 20 apples each and managed to hit between 0 and 20 apples. Boy, that looks messy. In order to split the data into quartiles, we first need to put the numbers in order and done.

Let's take a look at a few of the ways to split this data. For this method, you need to know how many data points you have, so count those first.19. Good. We first need to split the list in two equal halves. If there is an odd number of data points, as in the example, then the middle number, 8, becomes the median and is not included in either half. We'll call this Q2. Once we have two halves, we want to split these into further halves, giving us four sets of data with an equal number of data points in each set. Let's look at the first half of the list first. It has 9 elements, so the median will not be included in either quartile. Five is the median of the first half, so we'll call this Q1.

So 10 is the interquartile range for our data. Whew! Not all the archers have to clean up after the festival! Since Romeo finished the competition with a score of 14, we can now safely say that he is in the upper portion of the interquartile range and gets to stay in the castle where he'll be close to his lady love! But, there's something fishy about one of the newly-knighted knights.

"Go hence, to have more talk of these sad things: Some shall be empower’d, and some employed: For never was a story of more woe Than this of Juliet and her Romeo."

Would you like to apply the knowledge you’ve learned? You can review and practice it with the tasks for the video Quartiles and Interquartile Range.
More videos for the topic Statistics: Data Distribution