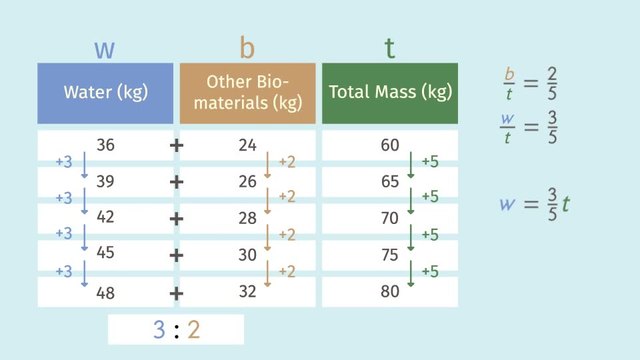 Basics on the topic From Ratio Tables to Equations

After this lesson, you will be able to transform ratio tables into equations.

The lesson begins by teaching you how to identify patterns in a ratio table and to determine the constant rate. It leads you to learn how to assign variables and set up the proportion to get the equation. It concludes with isolating the desired variable in the equation for ease of manipulation.

Learn about changing ratio tables to equations by understanding the balance of processes in the human body!

This video includes key concepts, notation, and vocabulary such as ratio (a relationship between two non-negative numbers, both of which are not zero); ratio table (a structured set of equivalent ratios); constant rate (the rate at which a quantity changes in relation to another is fixed or unchanging); proportion (two or more equivalent ratios); variable (a symbol, usually a letter, that is used to represent one or more values) and equation (a statement of equality between two quantities).

Before watching this video, you should already be familiar with ratio, ratio table, constant rate, variable, and equation.

After watching this video, you will be prepared to learn to solve real-world and mathematical problems involving unit rate, percent, and measurement conversion.

Common Core Standard(s) in focus: 6.RP.A.3 A video intended for math students in the 6th grade Recommended for students who are 11 - 12 years old

Transcript From Ratio Tables to Equations

When you listen to your favorite song, the music can move you! While dancing the robot, you're running on the electric energy of quality beats! In fact, our bodies work like machines. There are moving parts, and lots of inputs and outputs. We eat, drink, and breathe to keep our bodies in balance. Changing ratio tables to equations, gives us a way to understand the balance of processes that happen in our bodies. Let's start by examining our breathing process. The air we breathe in and out is composed of many gases. These gases are mostly nitrogen, and some parts oxygen and carbon dioxide. The nitrogen is stable as it is and doesn't change within our bodies. On the other hand, the inhaled oxygen is used to perform many important functions, like fueling our muscles, while the carbon dioxide is exhaled as a waste gas. Let's think about the breath you just took. Only 60 milliliters of that air is oxygen. We can use "ml" to represent mililiters. 60 mililiters is about the volume of two ping pong balls. Now breath out. With that exhale, only 15 milliliters of that is carbon dioxide. That’s about half a ping pong ball. So, what is the ratio of oxygen inhaled to carbon dioxide exhaled? 60 to 15. Here we have a ratio table. Now it shows what happens when we start to dance faster and our breathing volume increases. Do you notice any patterns in the table? For every 4 milliliters of increase in oxygen inhaled, there is a corresponding 1 milliliter increase in carbon dioxide exhaled. The 4 to 1 ratio is preserved in every breath! From this ratio table we can write an equation that examines the relationship between oxygen and carbon dioxide. An equation gives us a tool to find any gas amounts we want. We can use the 4 to 1 pattern, ratio, we marked earlier to help us establish the relationship. We see that 60 equals the pattern of 4 times 15, 64 equals 4 times 16, and so on, and so forth. With this relationship identified, it is easier to write an equation. When writing an equation, we should should identify our variables. We want to know about the oxygen and carbon dioxide relationship for any amount. Therefore, let’s call oxygen, 'x', and carbon dioxide, 'c'. In general, we can see oxygen, 'x', equals 4 times the carbon dioxide, 'c'. That's a useful equation and will give us how much oxygen we inhaled when we know how much carbon dioxide was exhaled. If you want to solve for carbon dioxide you can use the same equation and just isolate the c variable. You can’t live on oxygen alone. To move with fluidity, you need water, too. Even though different people have different masses, they all have a similar water to other bio-material components. This table shows the mass of water to other bio-materials found in different guys in kilograms. Do you see any patterns in this table? As the water mass increases by 3, the other bio-materials mass increases by 2, maintaining a nice, hydrated, 3 to 2 ratio. This ratio could give us our water mass when we know the mass of our other biomaterials. Do you know the mass of your other bio-materials? However, most people only know their total mass. How can we calculate the total mass of the given information? Just add the water and other bio-materials together to get the total mass for each person. Notice anything interesting in the ratio table? Because the water increased by 3 each time and the bio-material increased by 2 combined they increased by 5. This constant increase can be nicely translated into equations using ratios. Remember to first identify your variables. Let's define water as 'w', other bio-materials as 'b,' and total mass as 't.' So, we can write the proportion of other bio-materials, 'b', to total, 't', as 2 to 5, and the proportion of water,'w', to total, 't' as 3 to 5. We can solve for whichever variable we want to dance with. For example, let's pick water, 'w'! Isolate 'w' by multiplying both sides by 't'. This gives us water is equal to three-fifths 't.' For example, if your total mass is 55 kilograms, 33 of those kilograms are from water. So, we've learned a lot. Can you summarize the steps needed to go from ratio tables to equations? First, identify patterns. There should always be a constant ratio. Second, identify your variables and set-up the equivalent ratios. Lastly, isolate the variable you want to find. Smooth dancers have to breathe deep, stay hydrated, and understand their bodies. Oh? Looks like we've overlooked some gases. His machine is also running on fumes. But, that's another story.

From Ratio Tables to Equations exercise

Would you like to apply the knowledge you’ve learned? You can review and practice it with the tasks for the video From Ratio Tables to Equations.
More videos for the topic Collections of Equivalent Ratios