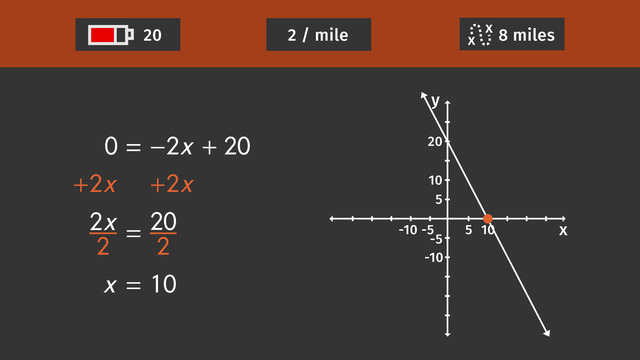 Basics on the topic Slope-Intercept Form

Equations written in this form follow this format: y = mx + b. The m-value represents the slope which is the rise over the run of the line – the steepness of the line. The b-value represents the y-intercept, the point where the line touches the y-axis, and the x-coordinate is equal to zero. You can learn a lot from an equation of a line written in slope-intercept form.

Let’s look at an example: y = -2x + 5. From this linear equation, I can tell the line is sloping down because the m-value is a negative number. The slope is somewhat steep because the larger the m-value the more steep the line. I can also tell the line touches the y-axis at the ordered pair ( 0, 5).

That’s a lot of information from an equation with only three terms. No wonder teachers often tell their students to write equations of the line in slope-intercept form. To learn more about this form, and some practical uses in the real world, take a look at this video.

Use slope to create equations of the line. CCSS.MATH.CONTENT.HSG.GPE.B.5

NASA is planning a special project for Valentine's Day--Mission4Love. They want to show a live sunset from Mars on national television.

In order to get the best view, they plan to send the Mars Rover to the top of a mountain. To complete the mission successfully, NASA has to figure out if the Rover has enough power to reach the top of the mountain and which route he has to take. We can help NASA by using slope-intercept form.

There are three common forms to write linear equations:

Today we will focus on Slope-Intercept form. As you can see, the slope is explicitly included in this form. Let's recall what slope is:

So, what about about the intercepts? Let's look at the formula for the Slope-Intercept form. Remember, M represents the slope of the line, while b is the y-intercept.

Lets look at the graph of y=2x+1 in the coordinate plane.

What happens if you change the y-intercept to 2? As you can see, the slope stays the same, but the whole line is shifted up one unit.

What happens if you change the y-intercept to -1? As you can see, the slope stays the same, but the whole line is shifted down by two units.

Now that we understand the concept of the y-intercept, let's look at slope.

Here, the slope is positive 2, meaning the graph is increasing from left to right. For every unit you go to the right, you must go up 2 units.

If we let m equal 1, the y-intercept stays the same, but now the slope is different. It still increases from left to right, but for every 1 unit you go to the right, you must also go up 1 unit.

If you change the slope to be zero, the y-intercept stays the same, but the line becomes horizontal. It is neither increasing nor decreasing.

Let's try changing the slope to −1. Again, the y-intercept stays the same, but the line is now decreasing from left to right because it has a negative slope. Now, for every unit right, you must go down one unit. Now that you've gotten the hang of slope-intercept form, let's get back to our Mars Rover.

The Rover currently has 20 units of solar battery power left. If it uses 2 units of battery power per mile, how many miles can the Rover drive before it runs out of battery? Can it reach a spot that is 8 miles away?

So how many miles can the Rover travel until the battery power gets down to 0 units? We put 0 in for y, the amount of battery power left. Now you can solve this equation to find x, the number of miles traveled:

And x = 10. So, this means that the rover can travel 10 more miles with it's power. It can easily reach the spot that is 8 miles away.

It looks like we are pretty much done. But unfortunately, the Rover needs the whole formula to get into perfect position for the sunset. To find the y-intercept, we can plug-in all of the other information we know.

Now we can solve for b. Subtract 7 from both sides. B equals negative 1. So the equation for the Rover's route is y = x − 1.

NASA managed to get the Rover in the perfect position for a romantic sunset. But what is this? Love is in the air on planet Mars.

Would you like to apply the knowledge you’ve learned? You can review and practice it with the tasks for the video Slope-Intercept Form.
More videos for the topic Linear Equations and Inequalities