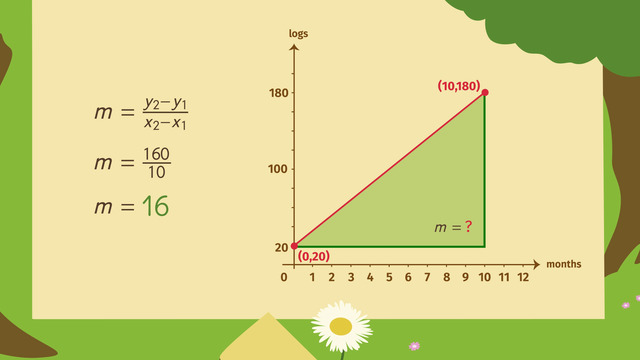 Basics on the topic Point-Slope Form

You are probably familiar with the formula for slope, you know, change in the y-values divided by the change in the x-values, the rise over the run. The point-slope form is simply the slope formula, rearranged.

To use the slope formula, you know at least two points on a line and use this information to calculate the slope of the line. If you know the slope, and at least on point on the line, you can use the point-slope formula to calculate unknown ordered pairs on the line. Also, often your teacher will ask you to present an answer in a certain format. If you are asked to present the answer in point-slope form, you will want to be certain what that form looks like. Whatever equation of the line you decide to use, one thing is sure, you are going to love this video!

Use slope to create equations of the line.

A trio of busy business beavers gets together to make plans for the current year’s production of logs. Last year was problematic and they don't want to make the same mistake this year.

Last year, the beavers took a long vacation in the middle of the year and they had to work a lot of overtime just to reach their yearly goal. A member of the group has something to say about the plan, but the boss beaver won't let him speak.

The big boss goes on and on and on... The boss wants to plan for steady production throughout all twelve months. To figure this out, the beavers need some help calculating the equation of a line. Let's help them.

The beavers, and you, can use two equations to figure out a steady production plan: the point-slope form & slope formula. I'll write the formulas down.

M stands for the slope of a line. Why M? No one knows for sure. What we do know is ordered pairs (x1, y1) and (x2, y2) are known points on the line, and the ordered pair (x, y) is any unknown point on the line.

Note how these two formulas are really just the same formula presented in two different ways. Why do we need to use two versions of the same formula? Well, stay tuned and you’ll see why two is better than one.

At the beginning of the year, the busy beavers have 20 logs in storage. To make sure they have enough logs for the annual winter festival, they need to have 180 logs in storage by the end of the tenth month.

Based on this steady production schedule, for each month, how many logs do the beavers need to produce and store?

To solve this problem, since we do know two points on the line, but we don't know the slope. The formula to determine the slope of the line is the best choice.

And, if they stay on this same production schedule, how many logs will they have in storage at the end of the twelve months?

Since we know the slope is equal to 16, and we know at least one point on the line, the point-slope form is easier to use to calculate the number of logs that will be produced and stored at the end of 12 months - if the beavers can stay on schedule, that is.

Now the beavers can get to work, to stay on schedule, they must produce 16 logs every month. That same member of the committee is still trying to speak, but the big boss only wants to listen to himself talk. I wonder what he wants to say.

Oh no! There’re no more trees! That must be what he was trying to say all along. I guess it's back to the drawing board...

Would you like to apply the knowledge you’ve learned? You can review and practice it with the tasks for the video Point-Slope Form.
More videos for the topic Linear Equations and Inequalities