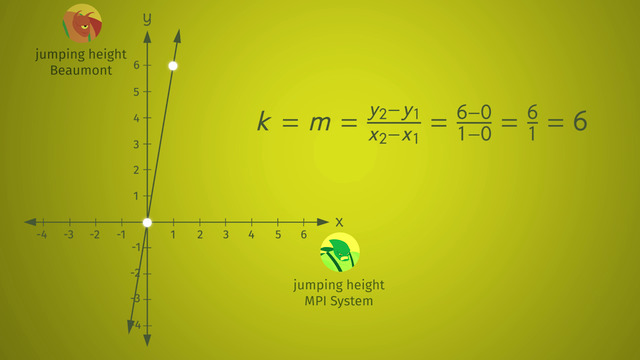 Basics on the topic Direct Variation

When variables are related by a constant, they have a direct variation. This constant is designated as the k-value, and we can write this relationship as a formula: y = kx or k = y/x.

When you graph this relationship, you will notice the k-value determines the steepness of the line, just like the m-value in the slope-intercept form but with one major different. On the graphs of a line with a direct variation between the two values - the line always passes through the origin. If the line does not pass through the point ( 0, 0 ) then there is no direct variation and no constant of variation, k.

Understanding the topic of direct variation is especially important for real world use such as currency exchange. You wouldn’t want to get stranded in Tibet without enough Renminbi in your pocket just because you didn’t understand how to calculate the exchange rate with the dollar using the constant of variation. To see what I mean, watch this video.

Welcome to the Interstellar Olympics, three thousand five! Let the games begin! Let's join some of the top triathalon contestants... Sir Lift-a-Lot from Planet Broadray can lift three thousand pounds! And here’s another favored competitor, Schulzy from the MPI system. He can lift 2 pounds.

Sir Lift-a-Lot and Schulzy are currently tied. This is just incredible! What a competition! What? You don’t get it? How can they have tying scores? To help you understand, let’s explore Direct Variation. This means one value varies directly with the other.

The constant of variation

The values are related by K, ......or the constant of variation. Now we can plug our known values into the Direct Variation formula. It doesn't matter which value is X and which is Y, but you do have to be consistent. Let’s assign two to X, and three thousand for Y. We divide both sides by 2 and get....

... K is equal to one thousand five hundred. Look what happens ...... when we double 3000 lbs to 6000 lbs. Notice thex value is also doubled. When variables have a direct variation, as one variable increases, so does the other. What do you think happens as one variable decreases? That's right, when we divide one value by four, the other decreases by a factor of four as well! Since k is our constant, it never changes.

For example, while on their home planets, if Sir Lift-a-Lot were able to lift four thousand five hundred pounds, it would be the same as if Schulzy were to lift 3 pounds. To tie, for each additional 1,500 pounds Sir Lift-a-Lot lifts, Schulzy must lift one pound. Schulzy from the MPI system is also competing in the high jump. He can jump 1 foot. Wow! This alien has really brought his 'A' game!

From Planet Beaumont, here's Schmiddy. Beaumont has less gravity, so although he ties with Schulzy, the absolute value of his jump is greater, measuring six feet. Let's draw a graph comparing the values of the jumps. Notice how the line goes through the origin? Graphs of values with a direct variation ALWAYS go through the origin. The y-intercept is always equal to zero.

Take a look at another formula todetermine k, the constant of variation… Does this look familiar? You betcha. It’s the equation for slope of the line. So does that mean k is equal to the slope of a line? You betcha again! Let’s plug in the numbers for this situation and figure out the value for k. Do the math. K is equal to 6.

Now for the Meteorite Throw competition... Sir Lift-a-Lot from Planet Broadray has recorded a throw of 100 miles...and Schmiddy from Planet Beaumont has recorded a throw of 2 miles. To figure out which contestant is currently in the lead, the Interstellar Committee for Weights and Measures created this chart… Well, would you look at that! There is a direct variation because all of the k values are equal. We have another tie!

Sir Lift-a-Lot is up for his first throw of this Olympics. Oh boy! I think it's gonna be a good one! And there it goooooooooooes! That might be a new record! What's this? ...so THAT'S what happened to the dinosaurs!?

Would you like to apply the knowledge you’ve learned? You can review and practice it with the tasks for the video Direct Variation.
More videos for the topic Linear Equations and Inequalities