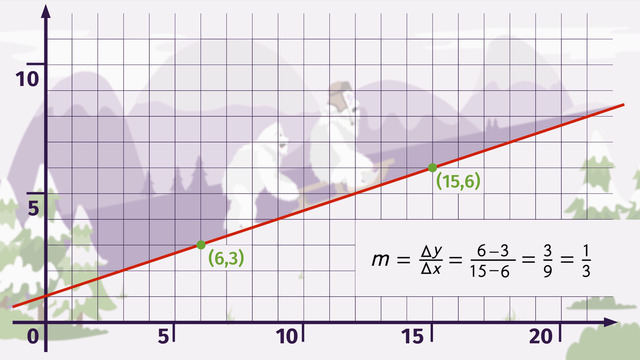 Basics on the topic Slope

How can you use the value of slope to compare the steepness of lines? The greater the absolute value of the slope, the more steep the incline. Slopes can be positive or negative. Often students are told to remember this information using a mountain analogy (let’s hit the slopes!).

For a positive slope, the line goes up the mountain and for negative slopes, the lines go down the mountain. I am positive it is more difficult to walk up a mountain – do you get my drift? What if there is no incline? Then the slope is zero, and if the line is vertical, the slope is not defined. Does this seem like a lot to remember? Watch this video on slope, and you will learn some helpful tips to remember this very important information, so you won’t go bombing on the Bunny Slope.

Use slope to create equations of the line. CCSS.MATH.CONTENT.HSG.GPE.B.5

On the slopes of the Himalayans, Leonetti the Yeti and his wife Betty are sledding. While Leonetti pushes his wife up the mountain, she nags at him to go faster. It’s hard work, and Leonetti is huffing and puffing with the exertion!

Why is it such hard work? There’s a mathematical explanation! Slope!

Slope is a number that expresses the steepness of a line. Imagine you draw a line along the incline of the mountainside. Slope is the change in height compared to the change in width.

Let’s take a look at the formula for slope. M stands for slope, and the triangle symbol is the Greek letter delta, meaning change or difference.

When you determine the differences of the x- and y-values, make sure you maintain the order of the coordinates. Alternatively, you can think of this as rise divided by run or simply rise over run.

Let’s figure out the slope of the route where Leonetti is having such a tough time pushing his bride up the mountainside.

Draw a line along the side of the mountain's incline and select any two points on the line. Then determine the ordered pairs for both points, and plug the numbers into the slope formula.

What happens if the angle of the incline is different? Imagine Leonetti and Betty take a different route, this time less steep. It’s not such a workout for Leonetti to push Betty up the mountain. How does the slope differ?

Just like before, use the slope formula to divide the change in height by the change in width. One divided by five is equal to one-fifth. FYI, on the same line, regardless of where you select the two points, the slope will always be the same.

Both times Leonetti has pushed his wife up the mountain. Are you wondering what happens to the slope of the line when the Yetis sled down the mountain? Great question!

So, does that mean we can conclude that a negative slope means a line slanted down? You betcha! And, the greater the absolute value of the negative slope the steeper the line? Right again!

Leonetti and his wife Betty are now on level ground. This time he pulls his wife across the snow. Again, she nags at him to go faster. What happens to the slope when there is no incline or decline?

I have a fantastic graphic to help you remember all of this. No, it’s not a Christmas tree, it’s a slope tree!

What about the tree trunk? What if the line is parallel to the y-axis? In that case, you would have a zero in the denominator, and we all know you can’t divide a number by zero – it’s not defined, so the slope is not defined as well.

What does all this mean for Leonetti and his nagging wife Betty?

Would you like to apply the knowledge you’ve learned? You can review and practice it with the tasks for the video Slope.
More videos for the topic Linear Equations and Inequalities