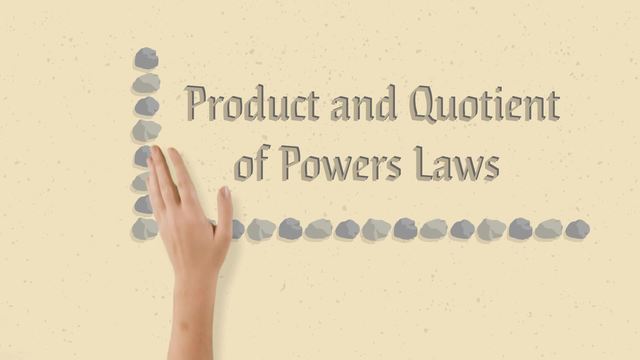 After this lesson, you will be able to simplify exponential expressions involving multiplication and division.

Learn how to multiply and divide exponential expressions by helping Archimedes calculate the number of grains of sand in the universe!

Before watching this video, you should already be familiar with exponential notation.

After watching this video, you will be prepared to learn more about the Laws of Exponents and how they apply to both positive and negative exponents.

Common Core Standard(s) in focus: 8.EE.A.1 A video intended for math students in the 8th grade Recommended for students who are 13 - 14 years old

Archimedes is deep in thought in his seaside garden in ancient Greece. He's contemplating how many grains of sand it would take to fill the universe. While he's pondering, he notices a small child placing stones in a rectangular pattern. Eureka! The space filled with stones represents a small piece of the universe. Perhaps Archimedes can learn something here. Because the universe is exponentially large. Archimedes can use the Product and Quotient of Powers Laws to solve this mystery. Archimedes counts the stones in the pattern. The length of the first side is 8 stones. And the length of the second side is 16 stones. But what's that? For the first side, he hears the child counting two... times two... times two. And for the second side, two times two times two times two. The child is counting the stones by multiples of two! Like Archimedes, we already know that we can represent repeated multiplication with exponents. So, when we multiply 2 by itself three times, we can write that as 2 to the third power. And for the second side, 2 times itself 4 times equals 2 to the fourth power. How many stones would the child need to fill the entire rectangular area? To find out, we'd need to calculate the area by multiplying one side length by the other. That gives us 2 cubed times 2 to the fourth. To multiply powers with like bases lets first rewrite them in factored form. This means we have two times itself three times multiplied by two times itself four times. How many twos is that? We see that this expression is just 2 multiplied by itself 7 times. This can be written as 2 to the 7th power. Do you notice any relationship between the original exponents of 3 and 4 with the final exponent of 7? Well, adding together the exponents 3 and 4 gives us the sum of 7. Hmm, interesting. Archimedes decides to use this reasoning to further understand his grains of sand problem. He estimates the amount of sand in his rectangular garden to be 10 to the 5th times 10 to the 3rd. Again, let's write each term in factored form. Notice that we have 10 times itself 8 times. This can be written as 10 to the 8th power. What about the relationship between the original exponents of 5 and 3 with the final exponent of 8? Looks like when we multiply powers with the same base we can just add their exponents. This brings us to an important law of exponents called the Product of Powers law. Based on the patterns we've seen, we know that when we multiply powers with like bases, we can add together the exponents. This law holds true for all numbers and can help us simplify expressions of this case. But what happens when we divide like bases? Let's take a look at the fraction 3 to the fifth divided by 3 squared. To simplify this expression, we can write the numerator in factored form and the denominator in factored form. Remember, with fractions we can cancel out common factors. What are we left with? This results in 3 to the third power, also known as 3 cubed. Do you have a hypothesis about where that exponent of 3 came from? Well subtracting the exponents seems to give us the answer. Let's try one more example just to make sure. How about the expression 8 to the 6th power, divided by 8? Remember, any number can be written with an exponent of one, because it just means that number is there one time. Again, let's factor each term... then cancel out common factors. Does your hypothesis still hold true by subtracting the exponents? Yes, when we divide powers with like bases we subtract their exponents. This is called the Quotient of Powers law, and it's a close cousin to the Product of Powers law you just learned. It also works for all numbers except here we are dealing with fractions so 'x' cannot be zero. Let's review our findings. The product of powers law states when multiplying together powers with the same base you can add the exponents together to simplify the expression. While the quotient of powers law states when dividing powers with the same base you can subtract the exponents to simplify the expression. Remember that the base can't be zero in the quotient of powers law. With this knowledge Archimedes finds out that 10 to the 51st grains of sand fit in a sphere that would make up our universe. That's one, zero, zero, zero, zero, zero, zero, zero, zero, zero, zero,…