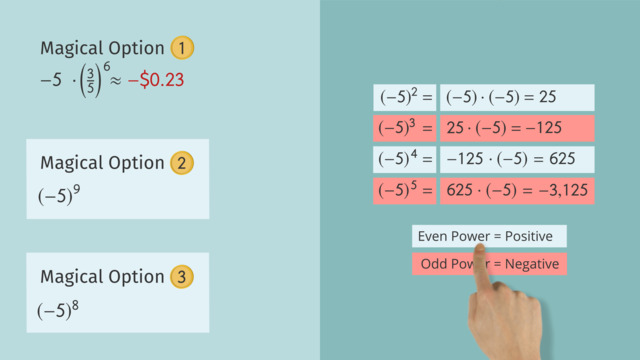 Basics on the topic Exponential Notation

After this lesson you will be able to use exponents, and determine whether a number raised to a given power will be positive or negative.

Learn about exponents by helping Wade and Skeeter decide what to do with the magical fish!

Before watching this video, you should already be familiar with exponential notation using base 10, and multiplication as repeated addition.

After watching this video, you will be prepared to learn about fractional or negative exponents.

Wade and Skeeter have pulled up an unusual fish in their nets. "Skeeter thinks they should sell it at the market and pay their debts, but Wade isn't so sure. " I mean, not only is this fish talking but he claims that if Wade and Skeeter will set him free he can transform their debt into a fortune, just by using exponential notation. Exponential notation is the shortcut we use for expressing repeated multiplication. So we can express 3 times 3 times 3 times 3 as "3 to the 4th power". 3 is the base - it's the number which is repeatedly multiplied. 4 is the exponent - it's the number of 3's that were multiplied. In general, given any number 'x', multiplied 'n' times, we can write the result as 'x' to the nth power". This applies to any rational number, including fractions and negative numbers. One-half, multiplied by itself 6 times can be written as one-half to the sixth power. Negative 5, multiplied by itself 6 times, can be written as negative 5 to the sixth power. Notice that we enclose fractions and negative numbers in parentheses to show that the entire number is raised to the given power. This is especially important when entering exponents into your calculator. Let's check back in with Wade and Skeeter. They started the day 5 dollars in debt. That means they have negative 5 dollars. The talking fish gives them three magical options to choose from. Let's see if we can use exponential notation to evaluate them. The first option is to multiply their money times three-fifths, every day for 6 days. We can write that as negative 5 times three-fifths multiplied by itself 6 times. How would you re-write that using exponential notation? Well, three-fifths is our base, since that is the number we are multiplying over and over. Which makes 6 our exponent, since that's the number of times we're multiplying. And we multiply all of that by negative 5. Ok, on to the second magical option, in which the fish offers to multiply their money times itself for 9 days. In this option, what number should we use for our base? We're multiplying negative 5 times itself, so that is our base. Which makes 9 our exponent. The third and final option the fish offers is to multiply their money times itself for 8 days. So we can write that as negative 5 to the eighth power. Now that we have all options in exponential notation, let's help Skeeter and Wade decide which choice will make them rich! Considering the first option, do you think that negative five times three-fifths to the sixth power will be positive or negative? Well, we have a negative number times a positive number so we can expect a negative result. Using a calculator, we find that negative 5 times three-fifths to the sixth is about negative 23 cents. How about the next two options, which involve a negative base raised to a power? To understand how negative bases interact with exponents, let's look at another example. Consider negative 5, squared. That's negative 5 times negative 5, or positive 25. If we multiply negative 5 times itself one more time that's 25 times negative 5, or negative 125. If we multiplied that again by negative 5 it would give us a positive result. One more time would give us a negative result. Are you starting to see the pattern? A negative base raised to an even power always gives us a positive result. While a negative base raised to an odd power gives us a negative result. So with that in mind, which amount of money would you rather have: negative 5 dollars raised to the ninth power or negative 5 dollars to the eight? Negative 5 to the ninth is a negative base raised to an odd power, so the result will be negative. Negative 1,953,125 dollars, to be exact. How about negative 5 to the eighth? That's a negative base raised to an even power, so the result will be positive. From negative 5 dollars to positive 390,625 dollars? Now that's what I'm talking about! Option 3 turns Skeeter and Wade's debt into profit! To review, exponential notation is the shortcut for writing repeated multiplication of a number by itself. The number multiplied is the base and the number of times we multiply is the exponent. When working with fractional or negative bases remember to use parentheses to avoid confusion. And finally, just in case you run into a talking fish remember that a negative base raised to an odd power gives a negative result while an even power gives us a positive result. Skeeter and Wade have made their choice to cash in and set the fish free. And right on cue, he grants them their reward! Filthy stinkin' rich? More like, like filthy sinking rich! Ha! Well, you know what they say: when working with exponents, be careful what you fish for!