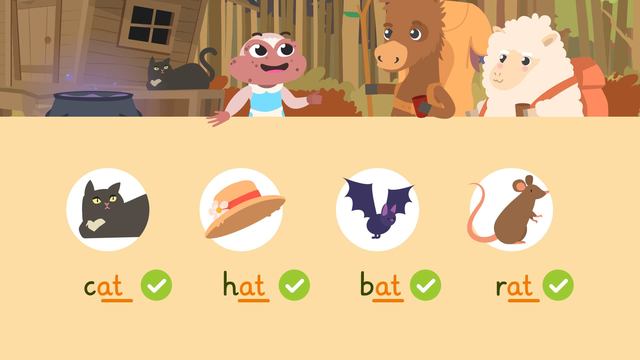 Basics on the topic Rhyming Words

In this Video on Rhyming Words for Kindergarten

While hiking, Dee and Kala come across a witch who is trying to remember the order of ingredients for her potion. They are all laid out and ready to go, but the spell blew away! All the witch remembers is that the ingredients must go in with their rhyming pair. In this video, Dee and Kala learn about kindergarten rhyming words.

What Are Rhyming Words for Kindergarten?

Examples of Rhyming Words for Kindergarten

When teaching rhyming words to kindergarten, it’s best to start with an example. Let's practice with the word: cat. The word cat ends with the sound ‘at.’ Other words that end the same are hat, bat, and rat. These words all rhyme because their last sound is the same: ‘at’.

Words like shoe or bird do not rhyme with cat because they all have different ending sounds.

It can also be useful to show rhyming words for kindergarten with pictures. This helps children with learning rhyming words in kindergarten. In the image below, there are pictures along with the words mug, bug, and net.

To identify the rhyming pair, first say the words aloud, using the pictures to help, and listen to the ending sounds. The rhyming words are mug and bug because they share the same ending sound: ‘ug.’