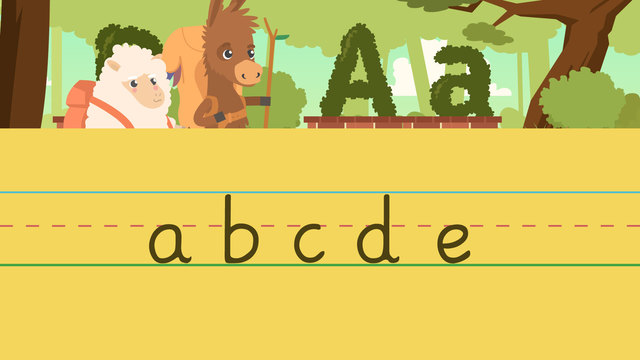 Basics on the topic Lowercase Letters

In This Video that Answers: What Is a Lowercase Letter?

Dee and Kala are walking through Alphabet Arboretum, a large outdoor garden. When they turn down a new path, they see something special. All the shrubs in this garden are shaped like letters. However, they aren't sure about the difference between the two sizes of letter. In the video, Dee and Kala learn about lowercase letters.

Let’s learn more about alphabet letters that are lowercase and how to identify them with the following explanation.

A lowercase letter means a letter that is smaller, or shorter, than its bigger letter partner.

All the letters in the alphabet have two sizes: big and little.The little letters are called lowercase letters. It is easy to remember because little and lower start with the same letter: L. Lowercase letters are smaller, or shorter, than their bigger letter buddies. Most only reach the middle line on a piece of paper.

Some lowercase letters do reach the top, blue line, but they are still smaller than their bigger letter buddies.

For example, look at the letter ‘d’. The little ‘d’ reaches the top line but its belly is still smaller than the bigger D.

Two letters, ‘i’ and ‘j’, stay mostly below the middle line except for the tiny dot that floats above them!

All the letters in the alphabet can be written as lowercase.

The letter ‘d’ is lowercase because its belly is smaller than the big D’s.