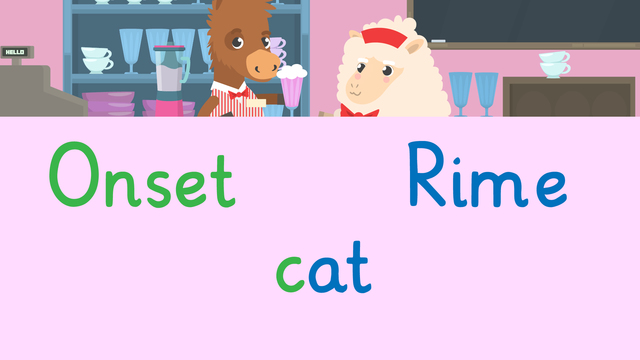 Basics on the topic Onsets & Rimes

In this Video about Onset and Rime

Dee and Kala are working at the Fountain Shop. But, insead of blending ice cream flavors to make milkshakes, they blend onsets and rimes to make words! It’s their first day, so they need help making the words just right. In this video, Dee and Kala learn how to blend onset and rime using word parts and word families.

What is Onset and Rime?

First, let’s define onset and rime. An onset is the beginning sound in a word. It's made up of one, two, or three consonant letters blended together.

A rime is the ending sound in a word. It's the group of letters that follow the onset. Rimes are usually made up of a vowel and consonants.

Words change meaning when their onsets change. For example, if you switch the ‘C’ in cat with an ‘H’, the word changes from a furry friend to something you wear on your head!

Why is Onset and Rime Important?

Rimes have patterns that readers can use to help them learn words. Look at the following words: crate, date, gate, plate, and skate. What do you notice? They all have the same rime, or ending sound of ‘ate.’ Learning to blend onsets and rimes helps us learn to read and write.

How to Teach Onset and Rime

It’s easiest to teach using onset and rime examples. Let’s start with onset-rime segmentation using the onset is ‘M’ and the rime is ‘OP.’

First, say the sounds slowly. Then, blend them by saying it faster this time: mop!

When you blend the sounds ‘M’ and ‘OP’ together you make the word mop!

Would you like to apply the knowledge you’ve learned? You can review and practice it with the tasks for the video Onsets & Rimes.
More videos for the topic Words, Syllables and Sounds