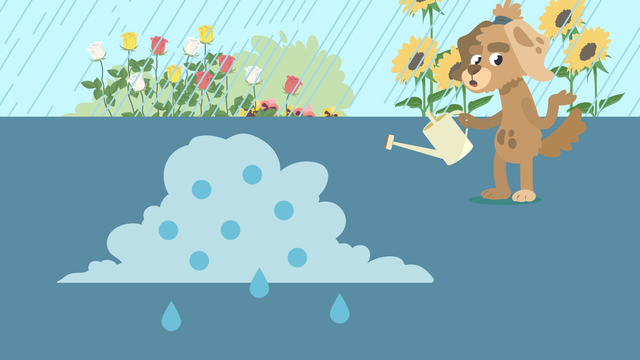 Basics on the topic Why Is it Raining?

Transcript Why Is it Raining?

Looks like Uma's flower garden is in desperate need of water! Huh, (...) was that a raindrop just now? It's not going to rain, is it? I guess Uma doesn't need to water after all! But she still wonders, "Why IS it raining"? To answer that, let's first look at how a cloud is formed. See all those drops of water? How do they get into the cloud? There is water in oceans, rivers, lakes or streams, but also in soil and plants. When the water is heated by the sun, ... it rises to through the air as water vapor. The higher it goes, the COLDER the air gets, which is why the water vapor cools down. This can create water, or cloud, droplets that gather around small dust particles. This process is called condensation. That's how clouds are formed from water droplets. Will rain fall from every cloud? No. The water droplets in this cloud are light. Look how they dance back and forth. Because they are so light, they can float in the air. But, if more and more drops come together, bigger drops are formed. I'm sure you can imagine that they can't float back and forth as easily now as they did before, right? When they become too heavy, they fall to the ground as raindrops, ... sometimes as drizzle or othertimes as heavy rain. Why is that? If the air is really cold at the top, the water droplets turn into ICE crystals. Only when they fall down, do they thaw which makes BIG raindrops. If the air at altitude is warmer, then the rain may fall to earth as a drizzle. You see, there are different types of rain, or precipitation. Precipitation is more than just rain. Can you guess what else it could be? It could be snow (...) or hail. If it is cold outside, or thirty-two degrees Fahrenheit or below, the water droplets in the clouds freeze and fall to earth as snow. With hail, it's a little different. The wind plays an important role. Hailstones first come out of the cloud as raindrops. But before the raindrops reach the ground, the wind pushes them back up into colder layers of air. There they freeze and fall down as hailstones. On their way back to the ground, they encounter water droplets that attach to it. In the process, they can be sent high into the air again ... and melt together with more ice grains. This process continues until the hailstones become too heavy and fall to the ground. Sometimes hailstones can get as BIG as golf balls! I'm sure you can guess that it's not exactly safe, right? I wonder if Uma needs to water her garden flowers at all? It doesn't look like it ... ... well, we can put the watering can to use with the indoor flowers then!

More videos for the topic The Weather

Weather Symbols and the Weather Map

How We Measure Weather

The Clouds and the Weather

Observe and Predict the Weather