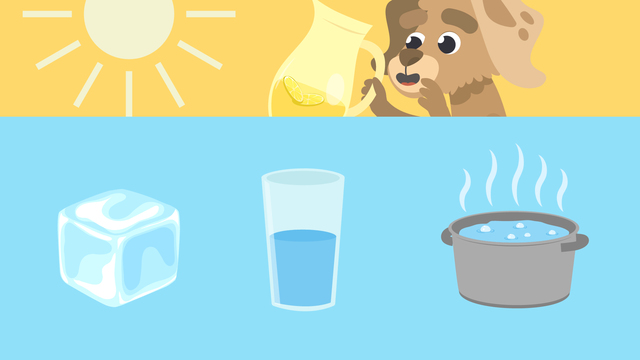 Basics on the topic Ice to Water Vapor: The Conditions of Water

Do you know the three states of water?

Water can be solid, also known as ice, liquid, which is water and gas, or vapor.

Watch this video to learn more about the conditions of water.

Transcript Ice to Water Vapor: The Conditions of Water

Phew, what a hot day! Now Uma needs a cold glass of lemonade! Full of anticipation she has already taken out the ice cubes this morning. Mmmhh...where have the ice cubes gone? To unravel the mystery, let's look at "Ice to Water Vapor":"The Conditions of Water" together. This is particularly exciting because water can CHANGE its state. Let's take a look at exactly what can happen to water. Frozen water is what we call ice, just like Uma's ice cubes. Ice is water in the solid state. Ice can melt when it warms above thirty-two degrees. Melting means that something becomes liquid. We now have water. There is still one more state! Heat can cause water to evaporate. Evaporation means that water becomes gaseous. We call evaporated water, steam, or water vapor. Gaseous also means that we cannot see the water vapor, like air.

When it gets colder, water vapor can condense. Condensation means that water vapor changes state and becomes liquid. Liquid water can also freeze again. In order for water to freeze, it must be below thirty-two degrees. When water is solid again, we call it ice. Uma knows what happened to her ice cubes, and she already has a new idea how to get the lemonade cold. But WHAT exactly happens when water changes its state? Water consists of individual water particles. If the water is frozen, the water particles form hexagonal crystals. The water particles bond with each other, which is why ice is so hard. "As soon as it gets warmer, above thirty-two degrees Fahrenheit, the water particles start to move more strongly." However, they stay together in smaller groups that move around in a disorganized pattern. The ice has melted, now you have a liquid in front of you. The warmer the water gets, the more the water particles move. Some move so much that they break away from their group. The water is now water vapor. I wonder what idea Uma came up with to chill her lemonade? Before we clear that up, let's briefly recap what you learned today:

Water exists in three states: SOLID, also known as ice; LIQUID, which is water; and GAS, we call water vapor. Ice melts at above thirty-two degrees Fahrenheit, turning it into water. If it gets even warmer, the water can evaporate into water vapor. If it gets cold again, water vapor can condense and thus become liquid again. Below thirty-two degrees Fahrenheit, water will freeze and turn to ice. Now you know the three states of water and the terms you can use to describe how water transforms.

Uma put her lemonade in the freezer. OH, now that looks a little TOO cold! Well, at least we know it will melt again.

Weather Symbols and the Weather Map

How We Measure Weather

The Clouds and the Weather

Observe and Predict the Weather