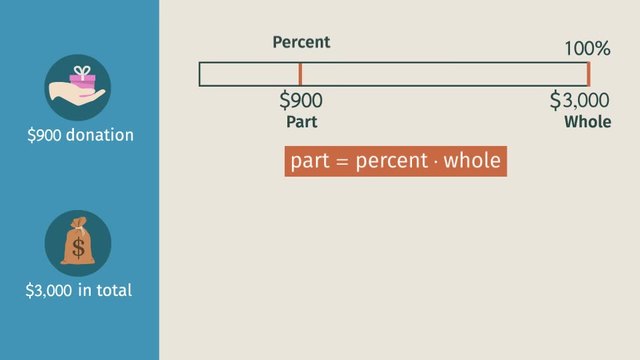 Description What is Percent & Part of a Whole as a Percent

After this lesson, you will be able to solve word problems involving percents using expressions, equations, and visual models.

The lesson begins by creating a diagram to visualize the relationship between percent, part, and whole. It leads to converting a value and its percent to 1%. It concludes with using the equation, Part=Percent x Whole, to substitute and solve for an unknown value.

Before watching this video, you should already be familiar with percents, and comparison language such as, “The part is the amount being compared to the whole.”

After watching this video, you will be prepared to learn how to solve word problems involving percent values greater than 100.

Transcript What is Percent & Part of a Whole as a Percent

Leelee is an ambitious young entrepreneur who's always got her finger on the pulse of the latest online trends. Today she’s launching a crowdfunding campaign to start her new high-end fashion line for pets. Raising money online is about as easy as herding cats. So to track her fundraising, we're going to have to help Leelee calculate percent as part of a whole. Leelee starts her fundraising efforts by blasting out an email to 135 people she knows. She hopes that 40% of them will respond. So how many people is that? We can create a diagram to help us visualize 40 percent of 135. Let's first look at the WHOLE, or 100 percent of the people she emailed. What number of people represents our whole? Since Leelee emailed a total of 135 people, that will represent 100 percent. Now, we want to figure out how many people represent our PART of 40 percent, so let's mark that here on the diagram. How can we go from 100 percent to 40 percent? One strategy for answering this question is to figure out what 1 percent is, then use that information to calculate 40 percent. So if we know that 135 people is equal to 100 percent, how could we find how many people are equal to 1 percent? Notice we can divide our whole of 100 percent by 100 to get 1 percent, so we can also divide our whole of 135 by 100 to find the missing part. That means 1.35 people is equal to 1%. Now that we know what 1 percent is, how do you think we can figure out 40 percent? Since we can multiply 1 percent by 40 to get 40 percent, we can also multiply 1.35 people by 40 to get 54 people, which represents 40% of the WHOLE. With 54 friends ready to donate, Leelee is feeling as excited as a puppy at a dog park. On the crowdfunding site Leelee is using, she needs to declare a fundraising goal. In order to collect the money she raises, she needs to reach 65% of that goal. Leelee needs at LEAST 19 hundred and 50 dollars to get her clothes on the catwalk. So she needs to set a HIGHER fundraising goal. If 19 hundred and 50 is ONLY 65% of her goal, what should her goal be? Let's use a diagram again, to help us sort all of that information out. We want to figure out our whole, which is a dollar amount equal to 100 percent of Leelee's goal. So let's call that 'x' on the diagram. Now, where on the diagram do we put our PART, which is 65 percent and 19 hundred 50? We know that 19 hundred and 50 is 65% of her goal. So we have the PART and the PERCENT. We know that the part equals the percent TIMES the whole. So 19 hundred and 50 is 65% times 'x'. Since 65% is 65 hundredths, how can we isolate ‘x’ to solve our equation? We can start by getting rid of the fraction on the right side of the equation by multiplying both sides by its reciprocal, 100 over 65. Then, we just simplify. So 3000 is equal to 'x'. That means Leelee needs to set a WHOLE fundraising goal of 3000 dollars. Let's see how her fundraising is going so far. Check it out: she just got a 900 dollar donation from some anonymous fat cat! Starting with this 900 dollars, what percent has Leelee raised so far, and what percent is left for her to meet her goal? The diagram shows us that 900 dollars gets her PART of the way to the WHOLE of 3000. Let’s call the unknown PERCENT ‘p’. Now let’s use our handy equation, part equals percent times whole. Since we're solving for the percent 'p', we can rewrite that as part over whole equals the percent. Plugging in our known values for PART and WHOLE, we can simplify our fraction to get 9 over 30 or 3 tenths, which we can rewrite as a decimal. We can write this as our needed percent because thirty one-hundredths is equal to 30 percent. Now we can see that Leelee has raised 30 percent of her goal. That means she has 70% left to go. Before Leelee's grand opening, let’s review the tools we used to calculate percents, using parts and wholes. First, creating a diagram is a great way to visualize the relationship between percent, part, and whole. When we know a value and its percent, we can convert to 1% by dividing by 100, then expand in order to find the value for a desired percent. We also have an equation, part equals percent times whole, which we can always use to substitute and solve for any unknown value. With a couple more deep-pocketed donations, Leelee has launched her pop star fashion for domesticated animals! But what’s wrong Leelee? Tired of internet fame already? Yikes! Or should I say... Mee-YOW!