Multiplying up to Three Digits Using the Standard Algorithm 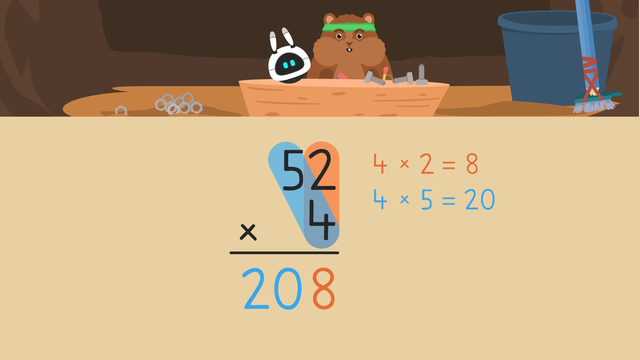 What is the Standard Algorithm for Multiplication?

How to do Standard Algorithm Multiplication

Now that our problem is set up for multiplication using standard algorithm, let’s solve it!

In order to calculate fifty-two times four first, multiply the bottom factor by the ones place, regrouping as needed. Four times two is eight, so we write it in the ones place.

No regrouping is needed, so we move on to the next step. Next, multiply the bottom factor by the tens place. What is the product of four times five tens? Twenty tens, and we write it in the tens and hundreds place.

Follow these simple steps if you want to practice multiplication with standard algorithm!

Transcript Multiplying up to Three Digits Using the Standard Algorithm

Multiplying up to Three Digits Using the Standard Algorithm