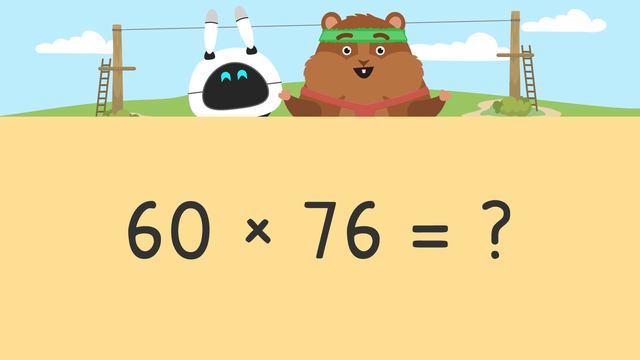 Multiplying 2 Digit Numbers by Multiples of 10

When multiplying larger numbers, we can use what we know about multiples of ten and area models to make our computation easier.

Mr. Squeaks and Imani are building a zip line course in their backyard. He needs to calculate the number of materials he needs to get the job done. In this video, we multiply 2 digit numbers by multiples of 10 using the area model to solve for the required materials. Will their zip line course be a success and get the ride of a lifetime?

Following the video, there will be continued practice with practice problems and a multiplying 2 digit numbers by multiples of 10 worksheet.

“Imani, Check this out!” “That looks AMAZING!” “ We can build a zipline course right HERE!” “ I need to calculate how much of the materials I'm going to need to build it.” By “Multiplying Two-Digit Numbers by Multiples of Ten", (...) we can figure out how much of the materials Mr. Squeaks will use to build his zipline. When multiplying single-digit whole numbers by ten, we can simply add a zero to the end of the number. This means that the digit's value becomes ten times greater. When multiplying larger numbers, we can use what we know about multiples of ten and area models to make our computation easier. Mr. Squeaks needs wood posts. The posts came in bundles of fifteen and he will use twenty bundles. Let’s set up the equation twenty times fifteen... and make an area model. Put the twenty on the left side of the area model. Now, look at the number fifteen. Since we know we can use mental math when multiplying by multiples of ten... let’s rewrite this number in expanded form. Fifteen is the same as saying ten plus five. Write this expression on top of the area model. To multiply, (...) first start with twenty times ten. Start by multiplying the digits that are natural numbers. Remember, natural numbers are all counting numbers starting with one, so we are not looking at the zeros. Two and one are natural numbers, (...) so two times one equals two. Now, look at the total number of zeros in the problem. There are two zeros, so we add two zeros to the product to show that it is one hundred times greater. Next, we look at twenty times five. Again, multiply the natural numbers first. Two times five equals ten. There is one zero in this equation. We will add that to the product to show that it is ten times greater. Add the partial products together… Two hundred plus one hundred equals three hundred. Mr. Squeaks will use three hundred posts to build his zip line course! Next, he needs thirty bundles of sixty-three-inch rope. To figure out how much rope he will use, we’ll multiply thirty and sixty-three. Set up the area model and put the thirty on the lefthand side. To make sixty-three easier to multiply, we will write it in expanded form. What is the expanded form of sixty-three? Sixty plus three. Start by multiplying the natural numbers in the equation... three times six. Three times six equals eighteen. Look at the number of zeros in the equation. How many zeros do we add to the product? We add two zeros,(...) thirty times sixty is eighteen hundred. Now, multiply thirty times three. What do we multiply first? Three times three (...) which equals nine. How many zeros do we add to the product? We add one zero. What do we get when we add the partial products? One thousand eight hundred, ninety. The zipline course will use one thousand eight hundred, ninety inches of rope. Lastly, Mr. Squeaks needs cable wire. He will use sixty bundles that have seventy-six inches of wire each. Pause the video and try this one on your own before we review it. How many inches of cable wire will Mr. Squeaks use? He will use four thousand, five hundred sixty inches of cable wire. Let’s check over the steps. First, set up the area model with sixty on the left side... and seventy-six is rewritten as seventy-plus six. Inside the model, multiply six times seven is forty-two… now add the two zeros to the product. Repeat that step in the other grid… six times six equals thirty-six. Add a zero to show the product is ten times greater. Finally, add the partial products. Four thousand five hundred sixty inches of cable wire. Remember, (...) We can multiply two-digit numbers by multiples of ten by... setting up an area model with the multiple of ten on the left side. Rewriting the two-digit number in expanded form on the top. Inside the boxes, first, multiply the sets of natural numbers ... and then add zeros to the products based on the number of zeros in the problem. Finally, add the partial products. “ TA-DA!” “ LET’S CHECK IT OUT!” [ squealing with excitement as it “rides” the zipline] “Beep! Boop! Bop!” “This IS AMAZ…..”[starts to speed up and sees he's heading right for the computer screen] [Mr. Squeaks is waving his arms and warning to get out of his way. He’s coming through.] “WOOOOOAH (...) LOOK OUUUUUT!”

More videos in Multiplication and Division