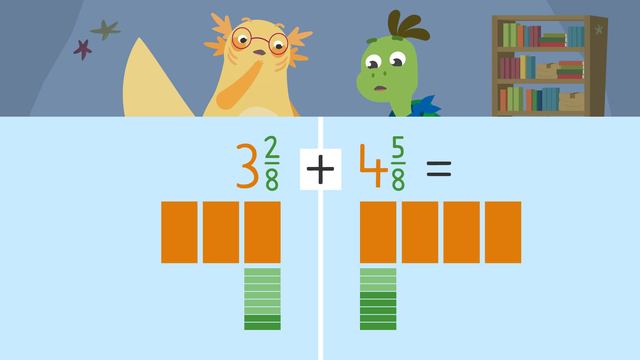 Basics on the topic Adding and Subtracting Mixed Numbers

How Do You Add and Subtract Mixed Numbers?

Have you ever tried making slime at home? It is a lot of fun!
For the special slime we want to make today, the recipe is difficult to read, as it contains mixed numbers. In order to figure out how much to use of each ingredient, we need to learn and practice adding and subtracting mixed numbers. Not to worry – the following text teaches us everything we need to know.

A mixed number is a combination of a whole number and a fraction. When you practice adding and subtracting mixed numbers with like denominators, you can follow these three steps:

First, we need to find the sum of the whole numbers. That means, we are adding three and four first to get the sum of seven.

Next, we find the sum of the fractions.
Remember: When adding and subtracting fractions with common denominators, we simply add or subtract the numerators and the denominators stay the same. Here, this means two-eighths plus five-eighths equals seven-eighths.

Next, we find the difference of the fractions. Three-fourths minus one-fourth equals two-fourths.

Our last step is again to simplify our answer if we need to. The numerator and the denominator have the common factor of two, which means it can be simplified to one-half.

How to Add and Subtract Mixed Numbers – Summary

Remember to follow the three steps above whenever you add and subtract mixed numbers with like denominators.

The last step in our recipe is to add one and one-third plus two and two-thirds of contact lense solution. Can you calculate how much that is in total?
The answer is... four! Well done. If you would like to practice some more to optimize your slime, take a look at the exercises and worksheets about adding and subtracting mixed numbers. Enjoy!

The numerator and the denominator have the common factor of two, which means it CAN be simplified to "one-half". Axel and Tank need one and one-half containers of baking soda for the recipe. Lastly, let's help them calculate how many containers of contact lens solution they need. In order to do that, we need to ADD "one and one-third (...) and two and two-thirds". First, can you find the sum of the whole numbers by adding? The sum of one (...) plus two(...) is "three". Next, we add the fractions. What is the sum of the fractions? The sum of one-third(...) plus two thirds(...) is "three-thirds". Our last step is to simplify our answer if we need to. Can we simplify the fraction three-thirds? Since we have all three parts of our whole(...)we can rewrite three-thirds as one whole. Now we add three PLUS one which gives us "four". Axel and Tank need four containers of contact lens solution for the recipe. Remember (...), you can add or subtract mixed numbers with common denominators by following three steps. The first step is to "add or subtract the whole numbers". The second step is to "add or subtract the fractions". The third step is to "simplify your answer if you need to". Luckily, Axel and Tank had enough of each ingredient on hand. Let's see how the recipe turned out!

Would you like to apply the knowledge you’ve learned? You can review and practice it with the tasks for the video Adding and Subtracting Mixed Numbers.
More videos for the topic Adding Fractions

Adding Fractions on a Number Line