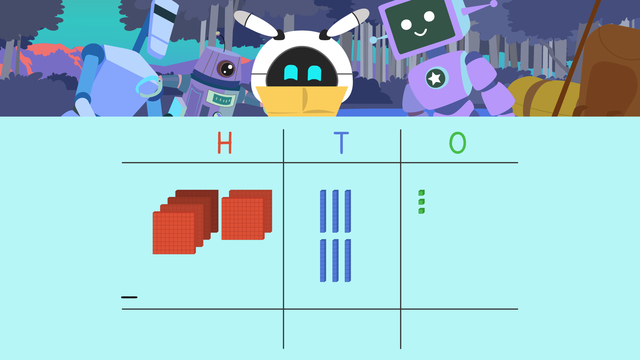 Mr. Squeaks is writing Imani letters from sleep away camp. He’s telling them all about the fun activities like making campfires and water balloon fights, but he’s having trouble filling in the details. In this video, we learn about 3 digit subtraction with regrouping using base ten blocks.

Why use Base Ten Blocks for Three digit Subtraction with Regrouping?

Modeling subtraction with regrouping with base ten blocks helps us see what is happening when we subtract. Rather than just moving digits, like in the standard algorithm, we can build and break apart numbers to see how values change. It is particularly helpful when we are regrouping. We build the first number in blocks to make the subtraction equation easier to regroup, or borrow from.

Starting in the ones column, the second number tells us to take away eight blocks.We can't do that because there is only one block here.

We need to REGROUP a set of ten from the tens place.There are now eleven blocks in the ones place that we can take eight away from. We are left with three blocks, so write three below. Now move to the tens place.The second number tells us to subtract five tens. Take away five from the six tens which leaves us with one ten. Write the number one below.

Now move to the hundreds place.There are no hundreds to take away, so write the number six below. Six hundred seventy one minus fifty eight equals six hundred thirteen.

Summary of Steps: 3 Digit Subtraction with Regrouping Base Ten Blocks

Have you practiced yet? On this website, you can also find 3 digit subtraction with regrouping using base ten blocks worksheets and exercises.

More videos in Addition and Subtraction

Make a number line to subtract

Equations with Addition and Subtraction