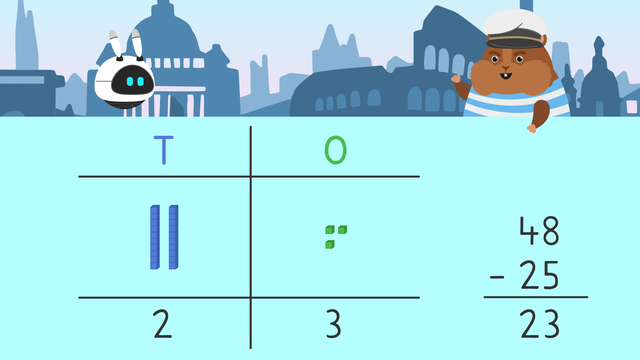 How to Subtract with Base Ten Blocks

How do you Subtract Using Base Ten Blocks?

Forty-eight minus twenty-five is twenty-three.

When you practice subtraction with base ten blocks no regrouping, the first step is to represent the number we started with on the place value chart using base ten blocks.The second step is to take away blocks, by first subtracting the ones place and then the tens place. What remains is the answer.

Would you like to apply the knowledge you’ve learned? You can review and practice it with the tasks for the video Subtracting Two-Digit Numbers Using Base Ten Blocks.
More videos for the topic Multi-Digit Subtraction

Make a Number Line to Subtract