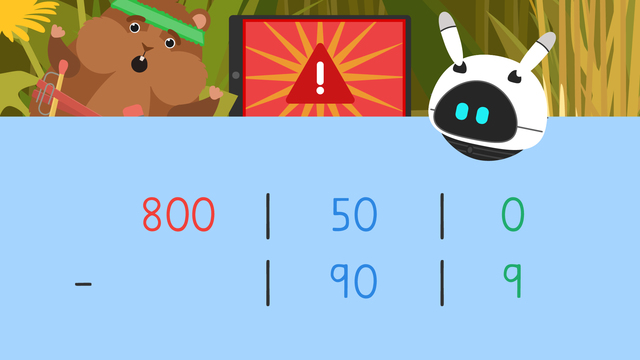 In this 3rd Grade Video on Expanded Form Subtraction with Regrouping

Mr. Squeaks and Imani have been playing a lot of games on their devices lately and now they can’t get any to load! Did they each use up all their data already? In this video, Mr. Squeaks and Imani learn about three digit subtraction with regrouping using expanded form to determine how data is left.

Expanded form is a way to write a number that emphasizes the value each digit holds. In a subtraction equation, we can write each number in expanded form to make regrouping easier.

Next, we subtract the hundreds column: seven hundred minus zero. We write the difference, seven hundred, below. Finally, put the answer back in standard form by adding it together. Seven hundred plus fifty plus one becomes seven hundred fifty-one.

Remember, we can write each number in a subtraction equation using expanded form to make regrouping easier.

Have you practiced yet? On this website, you can also find 3 digit subtraction expanded form worksheets and exercises.

Would you like to apply the knowledge you’ve learned? You can review and practice it with the tasks for the video Three Digit Subtraction with Regrouping - Expanded Form.
More videos for the topic Subtraction Using Place Value