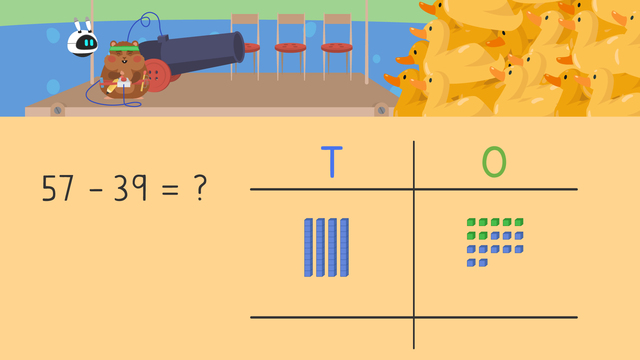 Mr. Squeaks is helping with the annual Rubber Duck Race, but things have gotten out of hand. Good thing Mr. Squeaks has this net so he can take out all the extra ducks! But how many ducks are left? In order to see how many ducks we have for the race, we need to learn about subtraction with base ten blocks with regrouping.

What Does Subtraction with Regrouping Mean?

Rules for Subtraction with Regrouping

How do you subtract with regrouping? Let’s take a look at this example of subtraction with base ten blocks regrouping from the video.

There were seventy-five ducks in the water, and Mr. Squeaks took eighteen out. In order to see how many ducks are left, we will subtract seventy-five and eighteen using the place value chart and base ten blocks.

Now there are fifteen blocks in the ones place that we can subtract eight from to get seven. Be sure to record the seven on the place value chart.

The third step is to subtract the tens place, so subtract one ten from six tens to get five tens. Be sure to record your answer on the place value chart.

Using Base-10 Blocks to Subtract with Regrouping Summary

The number remaining is the answer

Would you like to apply the knowledge you’ve learned? You can review and practice it with the tasks for the video Subtracting Two-Digit Numbers Using Base Ten Blocks with Regrouping.
More videos for the topic Subtraction Using Place Value