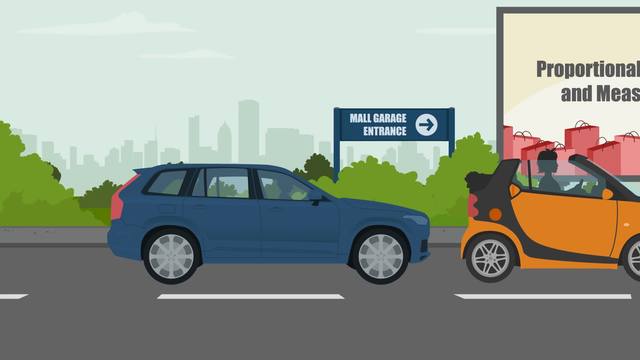 Basics on the topic Proportional Relationships and Measuring Rates

After this lesson you will be able to find unit rates and identify proportional relationships.

Learn about the constant of proportionality by helping Jackson get to the opening of his favorite video game store for Black Friday deals!

Before watching this video, you should already be familiar with using the context of a problem to find ratios and unit rates.

Why is Jackson up so early, and weaving through Los Angeles traffic like that? Well, Jackson is a huge fan of video games and today is Black Friday! He hopes to get to his favorite video game store, Game Another Day, before it opens so he can get some great deals on new games before they sell out. The store is tucked deep inside a gigantic mall and he’s stuck in a line getting into the parking garage! It’s 7:36, and the store opens at 8:00 AM! He’s only got 24 minutes to get there before it opens! He’ll need to measure rates and use proportional relationships if he has any hope of making it! Jackson’s got to think fast — should he stay in this line or ditch the car and make a run for it? His heart’s racing as he counts the cars to determine his place in the line. He’s the 30th car. Argh! He times the cars to find the rate at which they are passing the gate. After 1 minute 2 cars have passed through. After 2 minutes, 4 cars have passed through, and after 3 minutes, 6. We need to find the pattern, so we can calculate how long it will take for all 30 cars to pass. Can you see a pattern? The cars are passing through at a constant rate! But what is the rate? Remember, a rate is a ratio. The first ordered pair in the table tells us 2 cars pass through in 1 minute. That’s 2 cars per minute. Is the rate staying constant as more cars pass through? Well, 4 cars pass every 2 minutes and that reduces to the same unit rate of 2 cars per minute. Finally, 6 cars in 3 minutes also reduces to 2 cars per minute. Cars and minutes are proportional because the rates we calculated from these ordered pairs all reduced to the same, constant value. Therefore, we can call this number a constant of proportionality. It's a constant which represents the relationship between cars and minutes. With this constant, we can write an equation to determine how long it’ll take for Jackson to pass through. Let’s call the number of minutes 'm' and the number of cars 'c'. Notice that multiplying the number of minutes by 2 gets us the number of cars! That means 'c' equals 2 times 'm', or 2 'm'. The constant of proportionality is in our equation! It shows us the proportional relationship between two quantities. In this case cars and minutes. Whenever there is a proportional relationship between two variables, we can write an equation where the coefficient is the constant of proportionality. This equation can help us solve problems, and Jackson needs one solved right away! How long before he passes the gate? Remember, he’s the 30th car. We know 'c', and we want to find 'm'. Substitute 30 for 'c', and solve for 'm'. Dividing both sides by 2 gives us 'm' equals 15! It’ll take him 15 minutes to pass through. He's parked his car and made it into the mall but he's only got 5 minutes left until the store opens. The mall seems to be a maze of escalators he needs to navigate to Game Another Day! Each escalator takes 15 seconds to ride. And there are 12 escalators! What’s the unit rate? That’s right! It's 15 seconds per escalator! Remember, the unit rate is the constant of proportionality, which we represent with k. A short table will help you visualize the equation we need to write. Let’s use the variable 'x' for escalators and 's' for seconds. The unit rate comes from this ratio, 1 to 15. 1 times 15 gets us 15. x' times 15 equals 's', that is, 's' equals 15 'x'. We now have an equation relating seconds to escalators. Remember, Jackson’s got to ride 12 escalators — how long will it take? Substitute 12 for 'x' and we get 's' equals 180 seconds. That’s 3 minutes! Hurry! Jackson’s out of breath, but he’s at the store 2 minutes early. Looks like he's going to get some great deals on some great games. While he waits for the store to open, let's review. The unit rate is found by dividing corresponding values in a ratio table. The unit rate is also called the constant of proportionality, and is often represented by the letter 'k'. An equation in the form 'y' equals 'kx' represents a proportional relationship between 'y' and 'x', where 'k' is the constant of proportionality. These equations are powerful tools for solving problems! Let's check back in with Jackson to see what video games he got. Huh? What's wrong? Where are all the games? Looks like some other shoppers have more experience with Black Friday than Jackson.