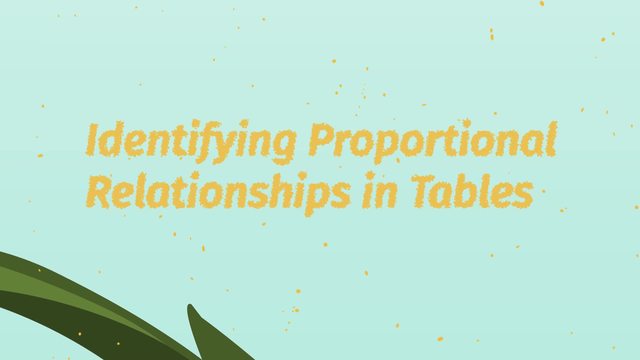 Basics on the topic Identifying Proportional Relationships in Tables

After this lesson you will be able to identify proportional relationships in tables.

Learn about proportional relationships by helping the bees collect their pollen by figuring out how to beat the wind!

Before watching this video, you should already be familiar with the definition of a proportional relationship and the equation y=kx.

After watching this video, you will be prepared to learn whether two quantities are proportional to each other by graphing on a coordinate plane.

Two bees are hightailing it out of their hive. Their queen just ordered them to produce more honey, but in order to do this, they need to figure out how to collect more pollen. They notice that all the pollen is being quickly blown away by the wind! They need to figure out a way to beat the wind, and collect all that pollen. Let's help the bees figure out how to collect pollen by identifying and using proportional relationships. In a table, we keep track of how many pounds of pollen get blown away when the wind is moving at certain speeds, in miles per hour. When the wind is moving at 10 miles per hour, 4 pounds of pollen is lost. At 20 miles per hour, 8 pounds is lost. At 30 miles per hour, 12 pounds. At 40, 16. At 50, 20. And at 60, 24. We want to know if there is a proportional relationship between the wind speed and the amount of pollen blown away. Such a relationship would allow us to determine how much pollen is lost based on the wind speeds throughout the day. Remember, two quantities, 'x' and 'y', have a proportional relationship if one of them is a constant multiple of the other.

In other words, the ratio of one quantity over the other is always equal to the same constant. So, to determine if there is a proportional relationship between wind speed and pound of pollen lost, we need to determine if the ratio of wind speed to pound of pollen lost is always equal to the same constant. First, let's write the ratio of wind speed to pollen in a new column in our table. Notice that the numerator is the wind speed and that the denominator is the pounds of pollen lost. Factoring out 10 and 4, and cancelling out common factors gives us 5 over 2. Factoring out 20 and 8, and cancelling out common factors also gives us 5 over 2. In fact, every ratio of wind speed to pounds of pollen lost simplifies to 5 over 2, meaning that the wind speed is proportional to the amount of pollen blown away. So, we know how much pollen will blow away given the wind speed, but how can we catch the pollen before it's gone with the wind? Using their smartcomb, the bees search for a solution for their problem. What's this? A pop-up ad for spider webs? One of the bees has a brilliant idea to buy a giant spider web to catch the pollen when the wind speeds are the strongest. To decide when to use the spider web, they study the weather report carefully, collecting data about the wind speeds at various times during the day. We can use the data they collected in this table showing the wind speed at certain hours in the day to determine if this relationship is proportional. Let's check by writing down the ratio of hour to wind speed and then simplify to see if the ratios are the same.