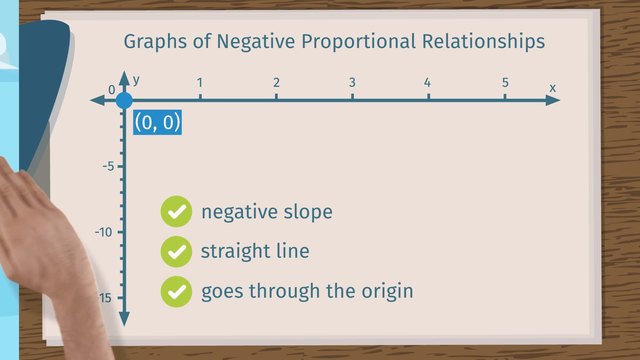 Basics on the topic Identifying Negative Proportional Relationships in Graphs

After this lesson, you will be able to confirm negative proportional relationships in graphs.

The lesson begins by teaching you that the slope of a negative proportional relationship is negative. It leads you to learn that since it is linear relationship, the graph is a straight line. It concludes by emphasizing that the graph should pass through the origin.

Before watching this video, you should already be familiar with slope, equivalent ratios, constant of proportionality and linear relationships.

After watching this video, you will be prepared to identify and compute negative constants of proportionality that can be used in equations aimed at solving real-world problems.

Common Core Standard(s) in focus: 7.RP.A.2.A A video intended for math students in the 7th grade Recommended for students who are 12 - 13 years old