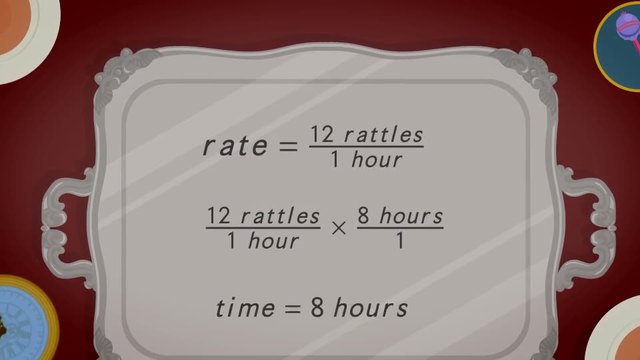 Information about the video Finding Rates with Division

After this lesson, you will be able to solve rate problems using division.

The lesson begins by teaching you what a rate is. It leads you to learn that units may cancel or not when solving rate problems. It concludes with a reminder to use per when dealing with units that do not cancel out.

Learn about finding rates with division by helping Charlotte and Godfrey figure out how much they have to endure before they reach the end of their journey!

This video includes key concepts, notation, and vocabulary such as rate (ratio of two different units); rate of travel (ratio of distance over time); per (pertains to division when units do not cancel out); and cancel (occurs when common units appear both in the numerator and denominator).

Before watching this video, you should already be familiar with ratios and units.

After watching this video, you will be prepared to learn conversion of measurement units.

Common Core Standard(s) in focus: 6.RP.A.2 and 6.RP.A.3.B A video intended for math students in the 6th grade Recommended for students who are 11 - 12 years old

Charlotte and her brother Godfrey are traveling by coach from London to Northern England. It’s quite a distance, but they are making the long trip in order to introduce their precious little ones to their parents. Godfrey thinks that his sister, Charlotte, spoils her pride-and-joy, Sophia, and Charlotte is certain that Godfrey spoils his baby, Monty. Both of the siblings think it's going to be a very long and difficult trip. To figure out just how long and difficult, they need to know about finding rates with division. They both want to know how soon the trip will be over. Godfrey keeps on checking his pocket watch, while Charlotte looks at the map. If only they would actually talk with each other, together they could figure out the rate they are traveling at. In order to find rate, we look at the ratio of two different units. For rate of travel, that's the distance traveled divided by the time. Godfrey saw that they've been travelling for 3 hours so far, and to Godfrey's extreme annoyance, his sister has been playing with Sophia the entire 3 hours. Charlotte looks at the map and sees they've travelled 21 miles. For her, that's been 21 miles of watching Godfrey spoil Monty. To find the rate they travel at, we divide the distance by time, 21 miles divided by 3 hours. It’s easy to divide 21 by 3 to get the quotient of 7, but what about the units? Since the units are different, they don’t cancel out. We can use the word per to represent division, giving us the unit miles per hour. That means, for every one hour on the road, they travelled 7 miles. Godfrey doesn't like how Charlotte constantly rattles Sophia's toy. She rattles the toy at a rate of 12 times per hour, and on the first day, they travelled for 8 hours. Godfrey wants to figure out how many times she rattled that loud toy. He multiplies the rate of 12 times per hour by the number of hours, which is 8. Notice how the hours unit cancels out. That means Charlotte rattled the toy 96 times in one day, which was far too much for Godfrey to bear! During the long trip, Charlotte has her share of complaints, too. She noticed that Godfrey was constantly feeding his precious Monty caviar and did not share ANY with her! There were 5 feedings per day. The trip lasted 6 days, so how much caviar is that? To figure it out, we can multiply the rate times the number of days. The rate is 5 feedings per day, and the time is 6 days, so the product is the total number of feedings over the 6 days. Notice how the days unit is in both the numerator and the denominator, so they cancel out! Over 6 days, Monty ate caviar 30 times. He must be bursting with caviar! Let's summarize what we learned. Sometimes when solving rate problems using division, the units are different and do not cancel out. In that case, the two different units are part of the answer. In the first example, those were miles and hours, which gave us the unit miles per hour. Other times one of the units cancels out. This only occurs when the unit is in both the numerator and the denominator. In the example with the rattling, the hours unit canceled out. In the example with the caviar, the days unit canceled out. Finally, they make it to the end of their journey and the grandparents finally get to meet the little ones they’ve heard so much about.

From Ratios to Rates and Rates to Ratios

Getting the Job Done: Converting Units of Measurement