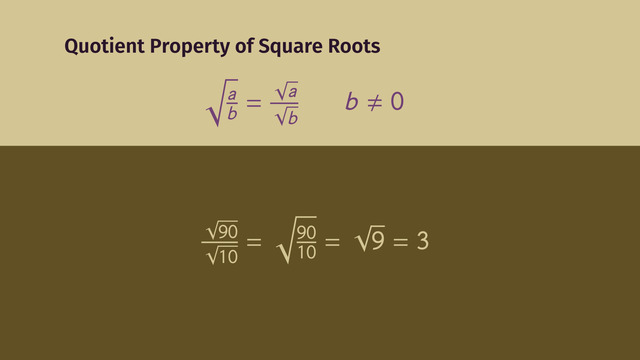 The most important tool for dividing radical expressions is the quotient property of square roots.

The quotient property of square roots can be used when simplifying or performing operations like division in radical expressions.

It is important to remember that the final result of dividing radical expressions must be in simplest radical form as well.

This video will show examples that explain how to use the quotient property of square roots for division of radical expressions.

Meet the man they call Wendelin
the path he takes is bafflin'.
The loyal, royal courier is he,
who expresses himself quite radically.
With no time to wander,
his travels take him yonder,
trundlin' packages for his Lord and Lady.
For a full day,
he travels the way
from Arden to Barton via Circuity.
Taking the long way 'round,
there's sure to be found,
a way shorter than his route currently.
What do I spy?
Is there a new bridge nearby?
Is it really a shortcut, Wendelin wonders.
To figure this out,
and leave no doubt,
we answer questions that divide radical expressions.

Rather than traveling two-thirds of a day to Circuity, to trip trap 'cross the bridge, and then travel an additional one-third of a day from there to Barton, Wendelin can simply cross the new bridge and travel directly from Arden to Barton! How's that, you ask?

Remember the Pythagorean Theorem? ‘a’ squared plus ‘b’ squared is equal to ‘c’ squared. Side 'c' is called the hypotenuse and is the longest side! Using the Pythagorean Theorem to solve for the missing measurement, Wendelin knows how to set up the equation to solve for a positive rational expression, but he needs help simplifying the radical expression.

The Quotient Property of Square Roots

Getting back to the original problem. Wendelin uses what he’s learned to simplify the radical expression. Using the Quotient Property of Square Roots, the solution is the square root of 5 over 3. Compared to the old route, the new route will save him one-quarter of a day!

Wendelin makes his merry way,
along his newfound pathway
to try out the new overpass.
He notices a troll,
who's blocking his goal,
with a lot of zeal and a lot of sass.
Radical as can be,
Wendelin solves the problems effortlessly,
but tomorrow's another story.