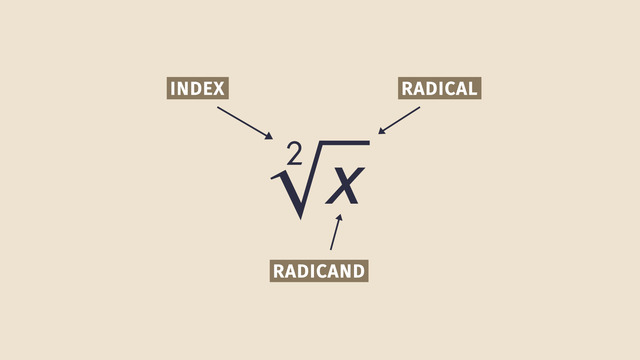 For a radical expression to be in the simplest form, three conditions must be met: 1. The radicand contains no factor greater than 1 that is a perfect square. 2. There is no fraction under the radical sign. 3. There is no radical in the denominator of a fraction. The procedure used to remove a radical from a denominator is called rationalizing the denominator.

Long, long ago, somewhere in the deep blue of the Caribbean Sea. Two rival pirate captains were madly in love, and as you can imagine, this was quite a complicated situation. To keep their dalliance a secret, they pretended to be mortal enemies, and to prove this, they constantly pretended to try to overpower the other. Captain Bonny hoisted her sails due east while Calico Jack headed south. Bonny had the wind at her back, so she traveled twice as fast as Jack. Only two hours later and with a heavy heart, she wondered how far she was from her paramour’s sloop.

Because the points are in the shape of a right triangle, she used the Pythagorean Theorem to solve for the unknown length. Remember, the Pythagorean Theorem is: a² + b² = c² and 'c' is the hypotenuse, which is the longest side. The hypotenuse is always located opposite the right angle. Now, by subbing in the lengths she knows, Bonny can calculate the unknown length by finding the square root of 20 x².

The notation of roots

Let’s investigate the proper notation for roots. I bet you always wondered about this. The small number is called the index, and it indicates the root. A root of 2 indicates the second root, or the square root; if no number is present, the second root is assumed. The radical is the boxy shape, and the radicand is the number under the box. Understanding and using the correct terms for math can make calculations easier!

There are two properties that will help us to solve problems that include square roots. First, let’s review the Product Property of Square Roots:

And speaking of firing a cannon. Is this for real? Oh, so that was her plan all along!