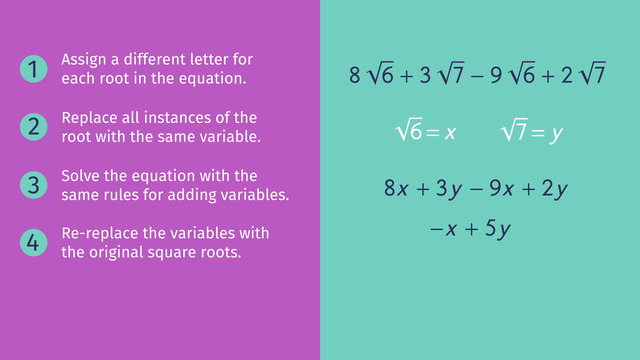 Basics on the topic Adding and Subtracting Radical Expressions

Meet Clara and her roommate, Maxine. Clara is a very free spirit. This is fine most of the time, but to the chagrin of Maxine, Clara likes to combine everything and Clara cooks for the both of them. Banana and Steak Tacos, Cake and Nacho Cheese, Fish and Chocolate. One day, while sleeping, Maxine slipped some new listening material into Clara’s playlist with one message: stop combining things that shouldn’t be combined. Max doesn’t know how many more blueberry marshmallow pizzas she can eat. The next day, expecting another honey cauliflower salmon dish, Clara’s roommate is pleasantly surprised to be presented with a tasty looking spread. Maxine is ecstatic and curious about what was on the tape.

Let’s take a closer look. If we have 4 times the square root of 3 plus 5 root 5 plus 6 root 3 minus 2 root 5, we have to first take a look at how many different numbers we have under the radical. In this equation, the numbers under the radical are 3 and 5. First, we have to replace the square root of 3 with ‘x’ and root 5 with ‘y’. Now, we can add the terms together using the rules we already know for adding variables. 4x + 6x = 10x and 5y - 2y = 3y. After we’re sure we’ve simplified things as much as possible, now we can simply plug our roots back in and finish solving the problem.

Let’s review the steps again, this time, using different numbers. Step 1: Identify how many different roots there are in the expression and assign each one a letter. Step 2: Replace all instances of the root with the same variable. Step 3: Solve the equation with the same rules for adding variables. Step 4: Re-replace the variables with the original square roots. Step 5: As always, PEMDAS.

Now that we know how to add and subtract radical expressions, let’s get back to the roommates and see what’s cooking. Would ya look at that? Maxine cooked! Clara looks impressed for now.