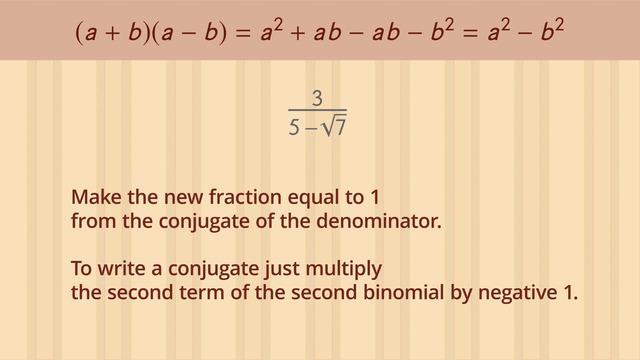 Basics on the topic Rationalize the Denominator

There are two very important points to remember when rationalizing the denominator. First, the product property of square roots, which states that √a * √b = √ab. This is important when removing a square root of a number, like √a, in the denominator. We can multiply the expression with a fraction equal to one, like √b/√b, so that the denominator product √ab can be simplified, if ab is a perfect square.

Second, the conjugate, which can be obtained by multiplying the second term of a binomial by -1. This is what we use when we have a term, like (a + √b) in the denominator. We multiply the expression with a fraction equal to 1, specifically (a - √b)/(a - √b), so that after multiplying, we will have a2 + a√b - a√b - √(b2), where the middle terms cancel each other out.

You will definitely find that rationalizing the denominator is an easy tool in simplifying expressions, especially when you master these two points.

Meet Mellow Mike. He’s a happy fellow and quite content with his tranquil life living on the first floor of a two-story house except for one problem, his roommate, Radical Ruben. Mellow Mike wants Ruben to move out and go away because Ruben is way too radical for Mike’s taste. The chaos Ruben causes disrupts the harmony of their shared space. Dealing with Reuben is a lot like Rationalizing the Denominator in radical expressions with fractions. How, you ask? Let me show you.

When you simplify radical expressions in fractions, just like Mike, you want to get rid of the radical living on the first floor of the fraction or rather, in the denominator. Take a look at this fraction: two over root 3. How can we make root 3 go away? To solve this problem, let’s first review the Product Property of Square Roots. The property states the square root of ‘a’ times the square root of ‘b’ is equal to the square root of the product ‘ab.’

Lookey there, that made the radical in the denominator disappear! Of course, now we have a radical upstairs in the numerator, but we can live with that. But, if there’s a factor joined with the radical, what then? No problem, follow the same steps as before. Multiply the fraction by the new fraction equal to 1 that is comprised of the radical number from the denominator. Again, the radical moves from the downstairs to the upstairs, and that’s okay. Finally, if possible, simplify the fraction.

Sum in the denominator

For example, for a + b, the conjugate is a – b. And just to help you understand why we do this, foil the two binomials the product is a-squared minus b-squared is equal to the difference of two squares because the two middle terms cancel each other out. Okay, so let's write a fraction equal to 1 that is comprised of the conjugate of 5 minus the square root of 7. Do the mathmand we're left with 15 plus 3 root 7 all divided by 18.

Looking at the constants and coefficients in each term, we find that they all have something in common: they're all divisible by 3. So we can factor out a 3 from the numerator and denominator and we're left with 5 plus the square root of 7 over 6. By multiplying the denominator by its conjugate, we're able to make the radical in the denominator disappear. It’s not magic, just math!

So just like in the example problems, Mellow Mike also got rid of his radical. I think you already know where he moved. Luckily for Radical Reuben, unlike Mellow Mike, Dancing Donna from the 2nd floor likes to raise the roof.

Would you like to apply the knowledge you’ve learned? You can review and practice it with the tasks for the video Rationalize the Denominator.
More videos for the topic Radical Expressions / Equations