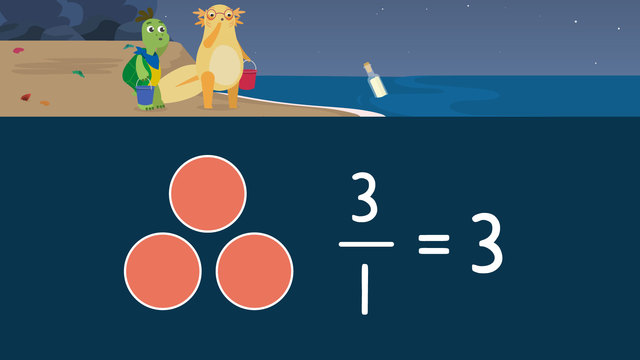 Basics on the topic Whole Numbers as Fractions

In this video on Writing a Whole Number as a Fraction

Tank and Axel find a bottle washed up on the beach. Inside, there is a stick of coral and a riddle: “Turn whole numbers to fractions and you will reveal all the treasures of the ocean that once were concealed.” However, they aren’t sure how! In this video on writing a whole number as a fraction, Axel and Tank learn about representing whole numbers as fractions while they practice with examples.

Whole Number as a Fraction

Let’s learn more about how to write each whole number as a fraction with the following explanation.

We can use this same idea when thinking about whole numbers as fractions. In whole number fractions, we have enough equal parts needed to make many wholes. We show this by writing the whole number as the numerator.

For whole numbers, it only takes one part to make a whole so one can be written as the denominator of the fraction.

If we have three whole parts of one, we can write this as three over one, or three wholes. We could also say three divided by one equals three.

How do you write a whole number as a fraction?

This means the number five written as a fraction is five over one. This is a simple way to write every whole number a fraction.

Summary of Steps: How to Write a Whole Number as a Fraction

Practice Writing a Whole Number as a Fraction (3rd Grade)

Have you practiced yet? On this website, you can also find whole number as a fraction worksheets and exercises.

More videos for the topic Improper Fractions and Mixed Numbers