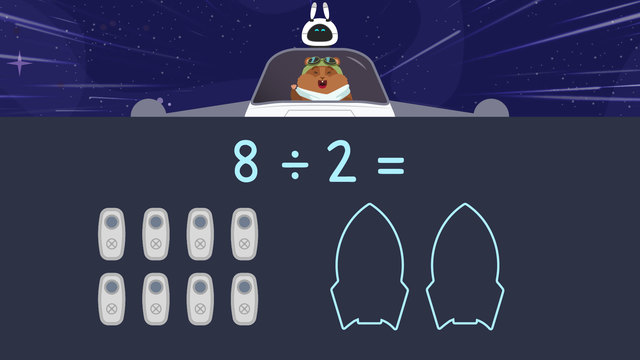 Basics on the topic Shares in Division

Imagine your class is helping out at a space racer factory. How exciting! But oh no, what is that sound? The distributer machine broke down during production! Not to worry: Your class can help so that each space racer is built on time. In order to do that, you need to do equal groups division to distribute materials between the space racers. Can you finish the division with equal groups problems and ensure the building of the space racers? The following text gives you some guidance in how to use shares in division.

How to Do Division as Equal Groups

To do division as equal groups, you need to:

To begin, we see that we have eight doors that need to be shared equally between two space racers.

This means our divisor is two and our dividend is eight:

First, we set up two groups to match our divisor:

Next, set up eight objects to match the dividend, ready to be shared:

Then, share all objects into each group equally until no more objects remain:

Congratulations, you figured out how to build the space racers in time!
For further practice, you will find some division with equal groups worksheets for 3rd grade next to the text.

Would you like to apply the knowledge you’ve learned? You can review and practice it with the tasks for the video Shares in Division.
More videos for the topic Single-Digit Division