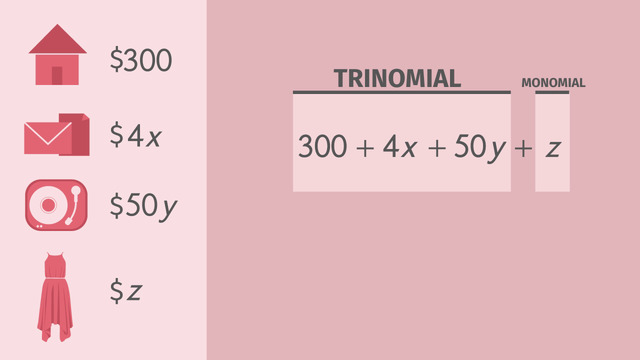 Polynomials, just like numbers, can be simplified by using a set of operations defined on polynomials, which are built from the algebraic operations and rules of arithmetic.

Today Bella wakes up extra early because she's very excited. Today is the day to plan her Quinceañera, a party to celebrate her 15th birthday. Quinceañeras are a Latin American custom, and they can be lots and lots of fun. Bella is very organized, you know, a real Type A personality. She's working on a list of all the things she needs to do and buy in order to have a fantastic party. She uses polynomials to organize the various costs associated with the party.

Expressing the Cost in a Term

Renting the party space costs is $300 so she writes 300 in her notebook. Invitations cost $4 each, but since she's unsure how many invitations she'll need, she writes 4x to represent the $4 times the unknown number of invites, 'x'. The D.J. charges $50 per hour. Bella hopes the dancing will go on till dawn, but who knows, so she uses the variable 'y' to represent the unknown number of hours and writes 50y. Lastly, but most importantly, is the price of her dress. Bella wants to look like a movie star, and who knows how much that will cost? So she writes the variable 'z' to stand for the unknown dollar amount.

Each of these expressions is a term, and a term standing alone is called a monomial. A monomial can be a constant like 300, or a coefficient with a variable--like 4x and 50y. It can also be a variable raised to a positive power like 'z', which is raised to the first power, written simply as 'z'. Remember, all monomials have one thing in common, they all have just the one term.

Bella wants to calculate the total cost of the party, so she adds the expenses. Just the cost of the room and the invitations can be represented as 300 + 4x. This expression has two monomials, so it's called a binomial. Get it? Bi means two.

Now add the cost of the D.J., which is 50y The expression now has three terms. You guessed it. This expression is called a trinomial because tri means three.

Next, add in the monomial that represents the cost of the dress, 'z'. 300 + 4x + 5y + z. This expression has more than three terms, so we call it a polynomial. Poly means many.

Let’s summarize what we've learned so far. There are some simple rules you can follow to help you identify whether or not a term is a monomial. Polynomials are made up of many monomials. Just like all thumbs are fingers, but not all fingers are thumbs, all monomials are terms, but not all terms are monomials.

Monomials are coefficients times a variable or variables that are raised to non-negative, integer exponents. Let's take a look at the chart: Monomials can also be multiplied by negative coefficients, again raised to non-negative, integer exponents, like (-1/3)x². When a variable is raised to the first power, like 1x¹, we don't have to write either number 1, since these are identities, so we just write 'x'. Finally, 5 is really 5 times 'x' raised to the zero power. And since anything raised to the zero power equals one, we're left with the constant. Be careful! Monomials CANNOT have a variable in the denominator or a variable with a negative exponent.
Binomials are made up of two monomials like 4x³ - (⅓)x² or x + 5.
Trinomials are made up of three monomials like 4x³ - (⅓)x² + x and polynomials are any expression made up of one or more monomials, and can also be called binomials or trinomials - depending on how many terms an expression has. As you can see, all the terms are separated by a plus or minus.

Bella has finally finished with her party planning list, and she’s ready to calculate the cost of her party. What’s this? An invitation to Laila Alyssa’s Quinceañera! Are you kidding me! It’s the exact same date that Bella had planned to have her party. Qué horror! Bella is so angry. She’s steaming. She’s hotter than a hot tamale!

Would you like to apply the knowledge you’ve learned? You can review and practice it with the tasks for the video Introduction to Polynomials – Naming Polynomials by Number of Terms .
More videos for the topic Polynomials

Factoring out the GCF

Factoring Trinomials with a = 1

Factoring Trinomials with a ≠ 1