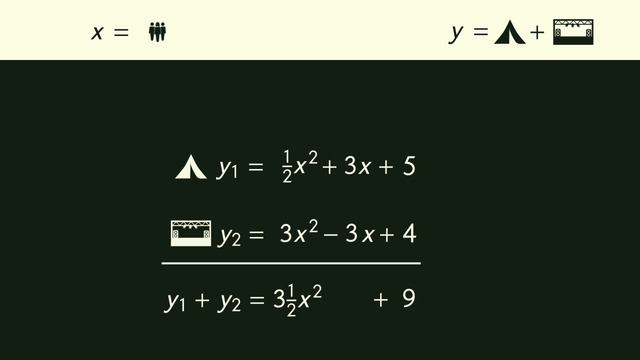 Basics on the topic Adding Polynomials

To work with polynomials, it’s important to know the lexicon, the language associated with polynomials: term, constant, monomial, binomial, trinomial, degree, like terms, and unlike terms. Polynomials are made up of terms. Terms can be variables alone, variables with exponents, and variables with coefficients with or without exponents. Terms can also be numbers which are called constants. Constants are really just numbers multiplied by xº (which is equal to one), but the variable and exponent are hidden - be aware that it exists.

A polynomial with one term is called a monomial; two terms is a binomial; three terms is a trinomial. More than that, we just call it a polynomial, so a polynomial with fifty terms is called a polynomial. How can you stay organized to do operations with polynomials? Before you can do an operation such as adding, put the terms in the standard form which is ordered by the degree of each term, from highest to lowest. The degree is determined by the exponent and for two or more variables in a term, the sum of the exponents.

To hear long forgotten, but still glorious rock bands, Jack Rock is planning a music festival to be held near his hometown of Roc-n-roll. Jack needs to figure out how much space he’ll need for the festival. Like most musicians, he's a brilliant mathematician!

Polynomials are classified by degree, and the degree of a polynomial is determined by the highest exponent found in the polynomial. This visual aid will really help you understand, so take a look. For this term, 2x², the exponent is equal to 2 so the degree is 2. How do you count the degrees if there are two exponents in a term, you ask? Here we have the monomial 3x⁴y².

The degree of a term

To find the degree of a term with more than one variable, just add the exponents of the variables together: 4 + 2 = 6, so it has a degree of 6. What if there’s no exponent? There’s always an exponent, but you may not see it. Take 5x for example. 5x is the same as 5x¹, so it's a first degree polynomial.

Order the term in Standard Form

The constant, 3, has a hidden variable and a hidden exponent! ...it’s the same as 3x⁰, making it a zero degree mononomial. So what, you may be thinking. Who cares? Why do we need to know the degrees? Well, if you have several terms in a polynomial, it can get pretty hairy, so when we write polynomials, we use the Standard Form to order the terms from the highest degree to the lowest. It’s good to use the Standard Form to write polynomials because it makes the expression easier to read and calculate. Let's order these terms in Standard Form 3x⁴y² + 2x² + 5x + 3.

The expression is y₁ is equal to 5+3x+½ x². Plus, he knows it’s important to have enough space in front of the stage for people to see the show. .. So, using his mad math skills, he figures out the expression to calcualate this amount of space is y₂ is equal to 3x²+4-3x. Told you. He's a genius!

To calculate the total area, Jack adds the two polynomials together, but first he must put them in Standard Form. To start, he determines the degree of each term. He knows that 'x' without an exponent has a degree of 1, and constant terms have a degree of zero. Next he knows he should order the terms from the highest degree to the lowest. Notice how Jack has set up the two expressions vertically. Add the polynomials together by combining all like terms. What are like terms? Numbers with the same variable and the same degree. Let's see how he combines like terms...

A video image is worth a thousand words, how he combines the like terms. You can see how the 'X's cancel out..now add the last constants. There’s more than one way to go about combining these polynomials. The expression can also be set up horizontally. Use parentheses to help you stay organized.

Again, Jack will combine like terms. Watch how the 'x' terms cancel out. As you can see, it’s the same sum as before. When you add polynomials, use the method that’s easiest for you. But, be careful and only combine like terms! Variables and exponent powers must be equal. Sometimes terms look similar, but they may have slightly different variables and exponents and cannot be combined. These are called unlike terms.

Whoo Hoo! Now Jack Rock can calculate the exact amount of space he needs for 'x' number of people. Look at the turnout! The concert sold out! It's time to party to the MAX!

Would you like to apply the knowledge you’ve learned? You can review and practice it with the tasks for the video Adding Polynomials.
More videos for the topic Polynomials

Factoring out the GCF

Factoring Trinomials with a = 1

Factoring Trinomials with a ≠ 1